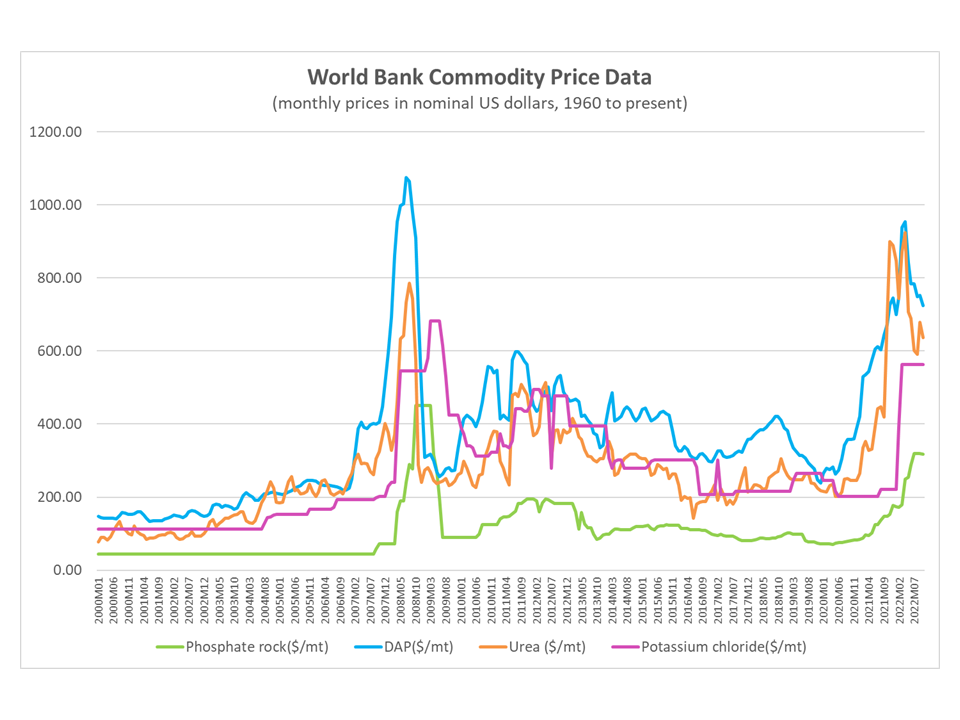 Russia's invasion of Ukraine is casting a dark shadow over the global economy post-pandemic by disrupting supply chains and creating inflationary pressures on energy, agricultural, and fertilizer prices. Russia and Ukraine are not only major grain exporters, but Russia in particular is the world's largest fertilizer exporter, and as of 2021 was the world's top exporter of nitrogen (N) fertilizer, second largest exporter of potassium (K) fertilizer (Belarus is third), and third largest exporter of phosphorus (P) fertilizer. The geopolitical crisis has a major impact on agricultural production in countries dependent on imported fertilizers. Today, we present an overview of the report GLOBAL FERTILIZER MARKETS AND POLICIES: A JOINT FAO/WTO MAPPING EXERCISE compiled by the UN Food and Agriculture Organization (FAO) and the World Trade Organization (WTO).

Global fertilizer prices began to rise around 2020, reaching record highs in mid-2021. In particular, the nominal price of nitrogen (N-Urea) fertilizer nearly triples from US$215/ton in January 2020 to US$678/ton in September 2022. During the same period, P-fertilizer prices also increase, with diammonium phosphate (DAP) fertilizer prices rising from US$265/ton to US$752/ton. In contrast, K-fertilizer prices, which had not been affected much by price increases until early 2022, jumped from $221/ton to $563/ton in March 2022.

The report argues that there is no doubt that historically the use of chemical fertilizers has contributed to improved agricultural productivity and global food security. In recent years, the environmental impact of fertilizer use has come under scrutiny, but the fact remains that developing countries have no commercially viable alternative in the short term to support fertilizer use in times of crisis. Africa accounts for only 3-4% of global fertilizer use, but 50% of that fertilizer is used for Africa's important cash crops. Constraints on fertilizer use are a major concern for food security.

At the same time, in the mid- to long-term, innovation is expected to play a role in both maintaining productivity and reducing environmental impact through the development of fertilizer management methods suited to the climatic, soil science, and socioeconomic conditions of each region of the world, as well as crop varieties that enable more efficient fertilizer use.