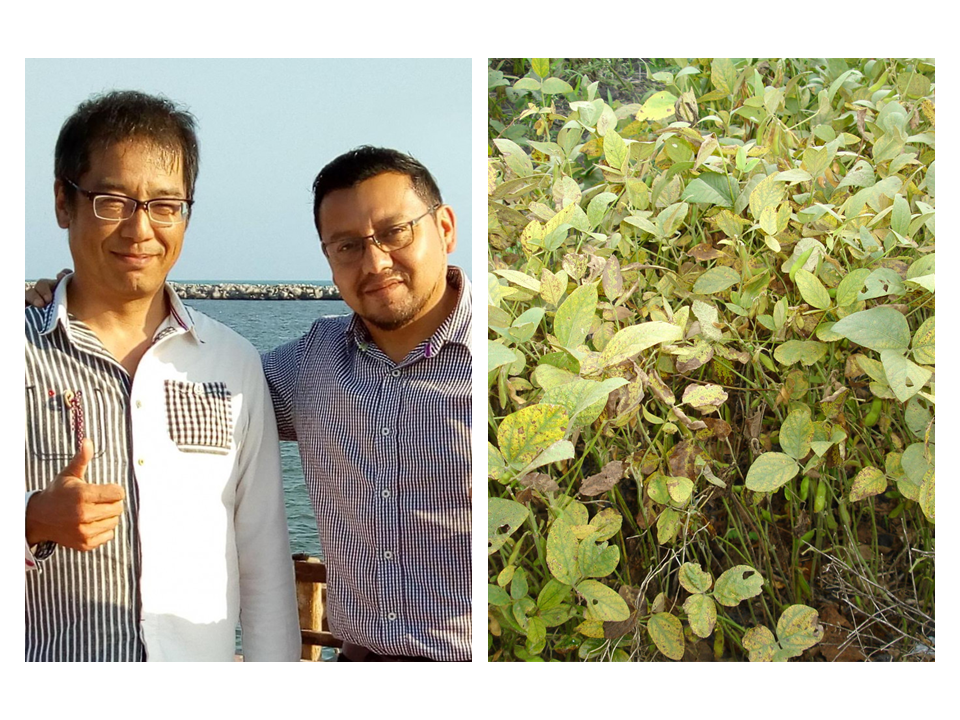 Mexico imports more than 6 million tons of soybeans annually, making it the world's third largest soybean importer after China and the EU. Mexico's domestic self-sufficiency rate for soybeans is less than 4%, which is higher than Japan's dependence on soybean imports. As a result of promoting soybean cultivation to improve domestic self-sufficiency, the planted area increased fourfold from 2003 to 2016, and soybean cultivation is expected to continue to increase in the future. With the increase in soybean cultivation, Asian soybean rust (ASR), which has severe impacts on soybean production in tropical and subtropical regions, has become a problem in Mexico. Since the first outbreak was identified in 2005, ASR has become one of the major soybean diseases. In 2014, JIRCAS  and Mexico’s National Institute for Forestry, Agriculture and Livestock Research (INIFAP), signed a Memorandum of Understanding for comprehensive agricultural research cooperation and have since conducted joint research on ASR and the development of effective resistant varieties.

As part of this joint research, the virulence against rust resistance genes in pathogenic samples from soybean fields was investigated in order to identify a rust resistance that would be stable and effective against the ASR that occur in Mexico. The results were compiled in a paper under the title Virulence Diversity of Phakopsora pachyrhizi in Mexico and published in PhytoFrontiers, one of the journals of the American Phytopathological Society. The authors are Julio César García-Rodríguez of INIFAP, Dr. Naoki Yamanaka, Senior Researcher in the Biological Resources and Post-harvest Division of JIRCAS, and their colleagues. This paper has received Honorable Mention for the PhytoFrontiers Best Student Paper Award 2021. This award is given to outstanding papers whose first author is a student, among those published in the journals of the American Phytopathological Society such as Phytopathology, Plant Disease, Molecular Plant-Microbe Interactions, Plant Health Progress, Phytobiomes Journal and PhytoFrontiers. In addition to the 2021 PhytoFrontiers Best Student Paper Award, this paper was also selected as an Editor's Picks, an editor's recommendation.

In this study, pathogenic samples of rust were collected from 2016 to 2019 in the states of Tamaulipas and Chiapas, the main soybean growing areas in Mexico which are roughly 1,000 km apart. The obtained soybean rust fungi were then inoculated into the differential varieties[ with each of the seven known rust resistance genes (Rpp1~Rpp6, Rpp1-b), susceptible cultivar without resistance genes, and an Rpp-pyramided line carrying three resistant genes (Rpp2+Rpp4+Rpp5) bred by JIRCAS, and their virulence was evaluated. The pathogenicity data obtained were also analyzed together with the already published data on rust samples obtained in Tamaulipas and San Luis Potosi in 2015. The results showed that these soybean rust pathogens were broadly classified into two groups: one group with South American-type virulence characteristics and another group with North American-type characteristics, and that the soybean rusts collected from Tamaulipas and Chiapas from 2016 to 2019 were included in each group. These research results are also presented in the JIRCAS Highlights 2021 in a paper entitled, “The pathogenicity of soybean rust pathogen in Mexico can be grouped into two broad trends”.

This paper also shows that resistance in a soybean line pyramided with three resistance genes is effective against all Mexican rusts obtained in this study. JIRCAS and INIFAP are collaborating to develop new rust-resistant soybean varieties which are expected to contribute to the improvement of soybean productivity and reduction of environmental impact of fungicides in Mexico.