541. Elucidating the Relationship Between Flowering Sex and Yield of White Guinea Yam― Towards the Development of Efficient Cultivation Methods― 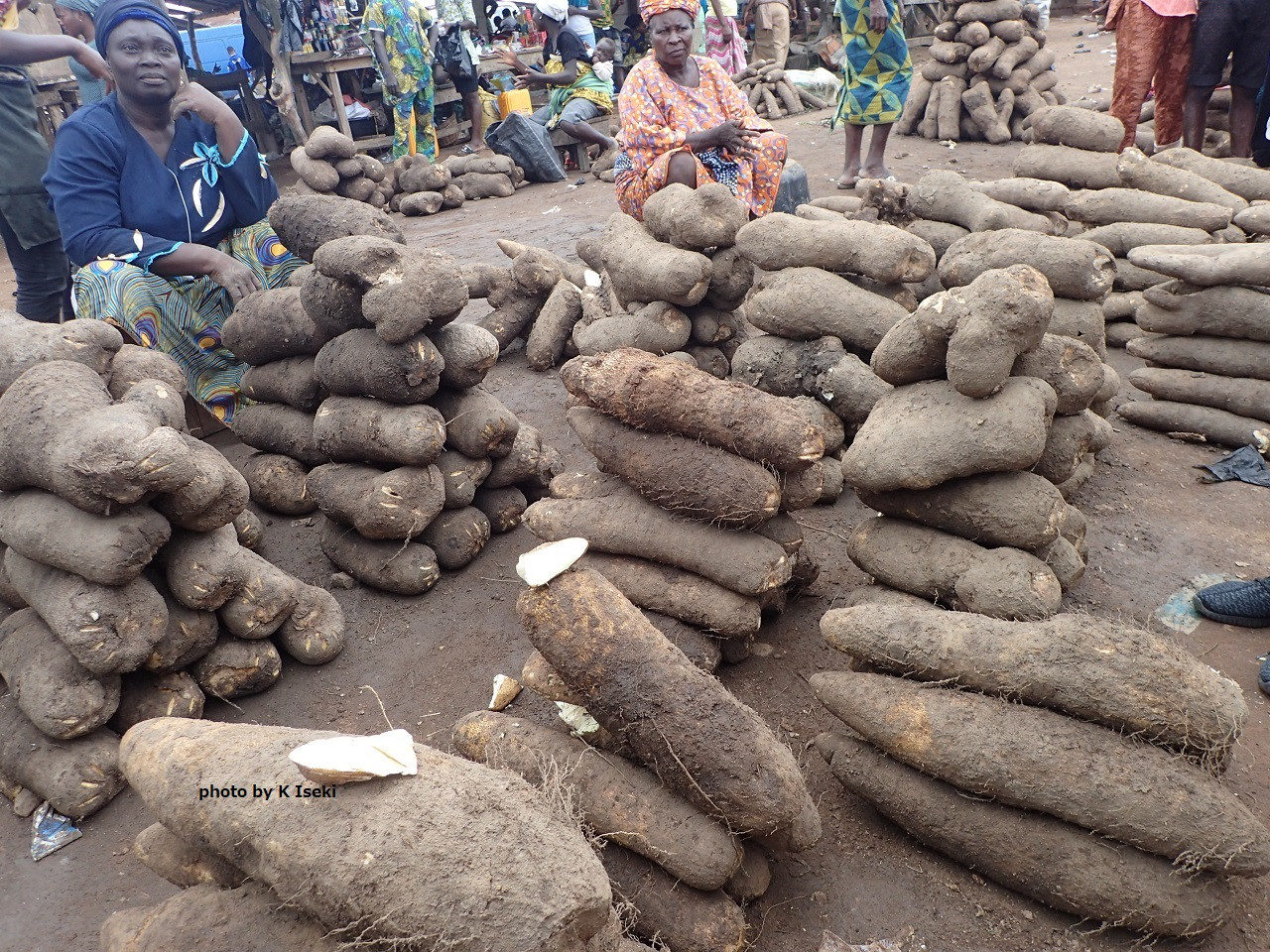 Worldwide, 75 million tons of yams are produced annually, more than 90% of which are grown in the coastal region of West Africa known as the Guinea Savanna, where yams provide 10-20% (energy basis) of the region's food supply (FAOSTAT, 2022). Yams are not only used as food, but are also deeply connected to the local culture, as they are used in traditional ceremonies and festival offerings. The major species of yam in this region is white Guinea yam, which is a relative of the yam species such as ‘jinenjo’ and ‘nagaimo’ found in Japan, but the tubers are large, weighing 1-3 kg each, with the largest weighing more than 5 kg. Although its production is growing with population growth, the yield per area has been stagnant for half a century (FAOSTAT, 2022), partly due to the large amount of labor and time required to cultivate it.

JIRCAS is engaged in research aimed at improving the efficiency of cultivation by improving yams' yield. The results of this research suggest the possibility of improving yields by controlling the sex of the flowers. Yams are generally dioecious plants with male and female flowers on different plants, and it has been known that there seems to be a difference in tuber yield depending on the sex of the plant. However, the relationship between yield and flowering sex has been controversial, as some literature reported that male plants produce better yields than female plants (Akoroda et al., 1984), while others reported the opposite (Dansi et al., 1999), and the flowering phenotype is unstable even among the plants with same genotype, with female in one growing environment becoming male in another.

In a joint research project between JIRCAS and the International Institute of Tropical Agriculture (IITA) in Nigeria, a cross population of yams consisting of more than 200 plants was grown in the same location and in the same way for four years, and a total of 2,628 individuals were carefully studied for flowering and other agronomic traits. As a result, it was clarified that the tuber yields of female plants were higher than male plants under certain flowering conditions. Furthermore, we also found that the flowering period is strongly influenced by the condition of the tubers. The identification of the genetic factors and environmental conditions that determine flowering is currently underway, and it is expected to lead to new cultivation methods that improve tuber yield by successfully control flowering phenotype and flowering period, as well as to the development of new varieties genetically modified for these traits.

The results were published in the international journal Frontiers in Plant Science under the title Variability of flowering sex and its effect on agronomic trait expression in white Guinea yam.

FAOSTAT (2022) Statistical database of the Food and Agriculture Organization of the United Nations.
http://faostat.fao.org/site/339/default.aspx.

Pick up 240. JIRCAS’ Efforts toward the Utilization of Yam Genetic Resources