Why white guinea yam was focused?

Farm households in many African countries subsist on so-called “Regional Crops,” which are regionally, or locally important crops traditionally cultivated for nutrition and income. These crops are often under-researched despite their potential to alleviate widespread poverty and hunger; they are nutritious, culturally valuable, adaptable to harsh environments, and helps promote diversified regional agriculture systems.

White Guinea yam (Dioscorea rotundata) is one of most important food and cash crops for the peoples and farmers in West Africa, as well as other root and tuber crops such as other yams, cassava, sweet potato and taro, play important roles in African diet and food culture.

The crop has been under-researched, despite their potential to alleviate widespread poverty and hunger; they are nutritious, culturally valuable, adaptable to harsh environments, and helps promote diversified regional agriculture systems. However, the situation has changed. Recently, we could observe intensive efforts in various area of yam value chain, research, breeding, dissemination and marketing to deliver suitable varieties to farmer. 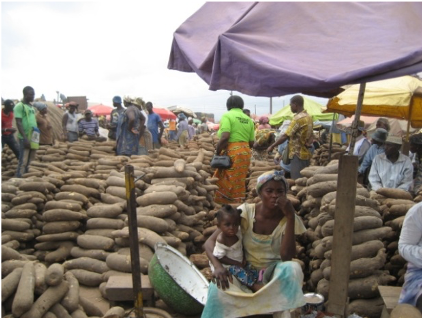 What is EDITS-Yam project of JIRCAS and why the yam variety identification toolkit was developed?

JIRCAS has recognized the urgent need to invest more in this crop, and initiated a collaborative research project. EDITS-yam together with International Institute of Tropical Agriculture (IITA) and several Japanese research institutions, to promote yam germplasm utilization and genetic improvement for West Africa in 2011. Also, in the same period, IITA’s YIIFSWA and Africa Yam projects has been initiated to develop and deploy varieties with higher yield, greater resistance to pests and diseases and improved quality for increment of yam productivity whilst reducing production costs and environmental impact.

Along with extensive works of those projects, jointly conducted with various partners, significant achievement has been made. For example, whole genome sequence of D. rotundata (594 Mb) was successfully assembled, and a total of 26,198 genes were predicted with the genomic region associated with sex determination (Tamiru et al 2017). The genome sequence information obtained in this work is expected to greatly accelerate the genetic analysis of D. rotundata and relative yam species. Another story could be novel yam propagation technologies: the aeroponics system developed by YIIFSWA which empower  yam seed producers and also farmers in combination with the various improved propagation methods has been developed (Aighewi et al 2015, Bömer M et al 2018)

However, we still find strong requirements from yam improvement program, in seed system, and variety dissemination program for the technology to verify yam genotypes (varieties, lines and germplasm) for their hand. We strongly believe this variety identification tool for white guinea yam contributes to effective and high-quality breeding and seed propagation.