More than half of the world's soybean production is in the three South American countries of Brazil, Argentina and Paraguay, but soybean rust is a major problem locally. JIRCAS is developing soybeans that are resistant to rust with domestic and overseas research organizations. In Paraguay, we have succeeded in developing cultivars resistant to Asian soybean rust with local research institutes.

― Where do soybeans come from? ―
Natto, tofu, miso, soy sauce, and edamame are just some of the many foods derived from soybeans, and there is probably no one who doesn’t eat any of these foods daily. Even those who say that they don't eat much Japanese food may be eating fried chicken and sweets. Soybean is the most commonly used vegetable oil. More than 70% of domestic consumption is used as a raw material for salad oil. Soy is also used as livestock feed and food additives, so you can't really have a soy-free diet. However, the domestic self-sufficiency rate of soybeans is less than 10%. Therefore, stable production in soybean-producing countries overseas as well as improving the self-sufficiency rate and stockpiling are important and directly linked to people's lives. JIRCAS has been conducting research on overseas soybean production for quite a long time. So where do soybeans come from? About 70% of Japan's soybean imports are from the United States, but more than half of the world's soybeans are produced in Brazil, Argentina, and Paraguay, and traded in the international market. In order maintain a stable soybean supply, it is necessary to increase the sources and improve productivity in these major producing countries.

― Soybean rust ―
Soybean production in South America has various problems such as drought, diseases and pests. Among the diseases that affect soybeans, the most problematic disease in South America is Asian soybean rust. The disease is mainly caused by infection of soybean leaves with a type of fungus that causes the plants to wilt and die prematurely. It got its name from the tan or reddish-brown lesions (spots) that develop in the leaves so that the plant looks like it has rusted. If the leaves wilt and die, naturally pods cannot be produced, so farmers spray fungicides to control the disease. In Brazil, spraying with fungicide could cost tens of billions of yen every year. The pathogen of soybean rust was discovered in Japan over 100 years ago, but is now widespread in Asia, Africa, the Americas and around the world, making it the most feared soybean disease, especially in the tropics and subtropics.

― Development of soybeans resistant to rust ―
Application of fungicide is indispensable to prevent the spread of the disease in large-scale crop cultivation. However, the use of fungicide is expensive and environmentally unfavorable. Moreover, extensive use has increased the the number of rust fungi for which fungicides do not work. Therefore, JIRCAS, in collaboration with local research institutes in Brazil, Paraguay, Argentina, Uruguay, and Mexico in Central America, collects and investigates rust fungi from soybean fields, and develops soybean cultivars that are resistant to these local rust fungi. In Paraguay, we started joint research with the Centro Tecnológico Agropecuario del Paraguay (CETAPAR) in 2011, and succeeded in developing Asian soybean rust-resistant cultivars JFNC 1 and JFNC 2 (JFNC is derived from the names of both organizations, JIRCAS and Fundación Nikkei-Cetapar). Argentina and Uruguay are also developing soybean cultivars with their respective national institutions, and Asian soybean rust-resistant cultivars will be released in the near future. 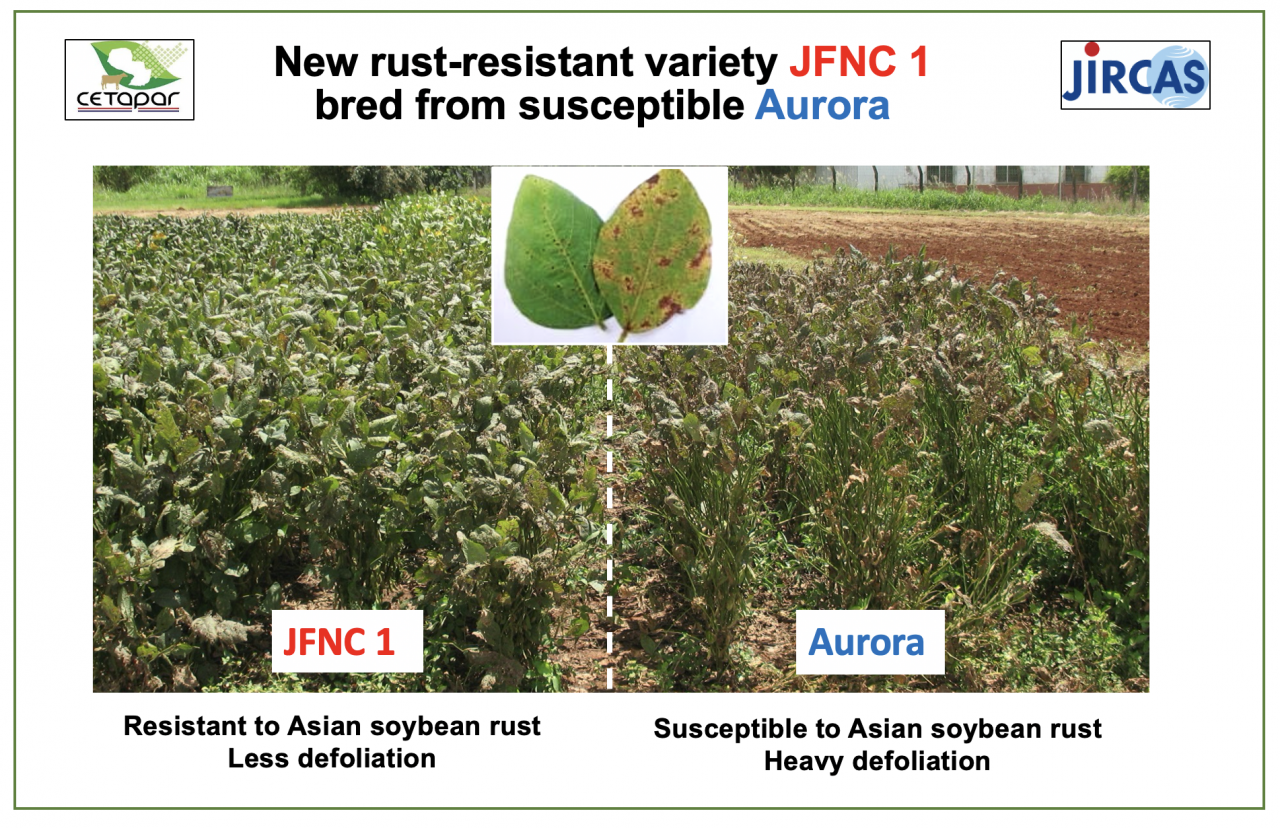