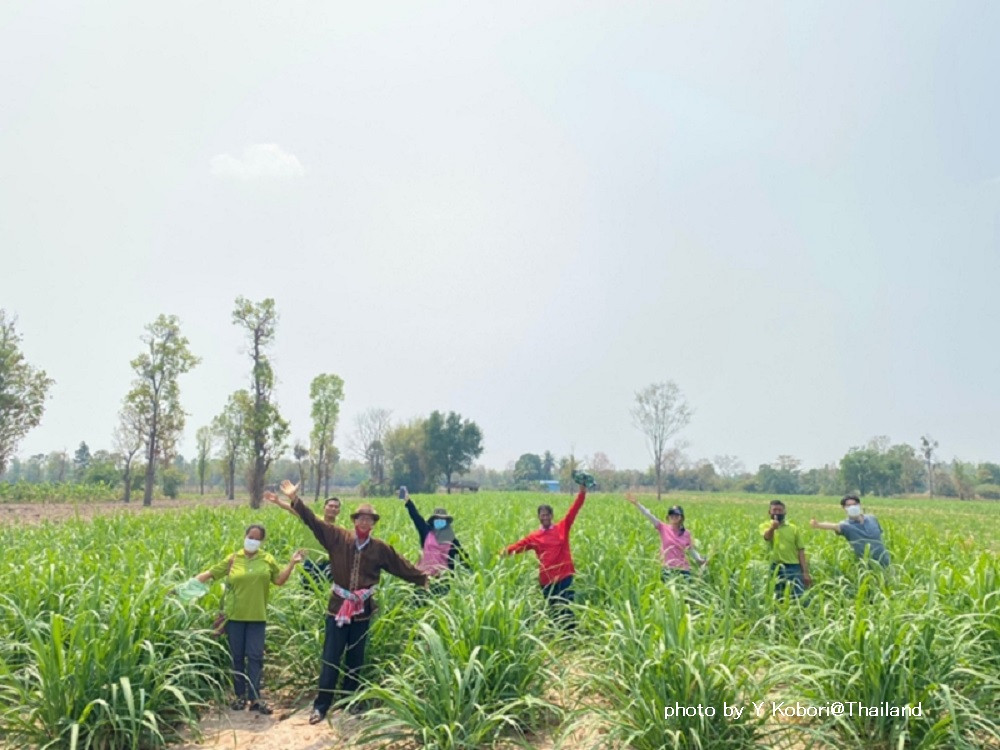 Sugarcane. Yes, it is the raw material for sugar that everyone is familiar with. It is a member of the grass family (Gramineae) and is characterized by its long, thick stalks that grow up to about 6 meters in height. A stalks weighs about 1 kg on average, and contains plenty of sweet substance that is used to make sugar. The liquid squeezed from the stalks is crystallized into sugar, which is also used to make rum. Sugarcane is also used as feed to raise cattle and other animals. But that's not all. Recently, sugarcane is also used as a raw material for bioethanol, which is being used worldwide as an eco-friendly fuel that reduces carbon dioxide emissions. As you can see, sugarcane is an important crop that is very useful in our daily lives. The stalks of sugar cane have buds attached to them, which are planted as seedlings to increase the number of plants, but there are many obstacles to their cultivation.

One of these obstacles is sugarcane white leaf disease. When infected, the leaves turn white and then the plants die. There is no effective treatment after infection. In severe cases, it has been reported to have killed more than 30% of the sugarcane in some areas. The disease is transmitted by insects. Since there is an incubation period of several months after infection, the disease can spread further if infected sugarcane is used as seedlings without being aware of the infection. Sugarcane white leaf disease was endemic only in some parts of Thailand. Since Thailand is the world's second largest exporter of sugar, the damage caused by this disease alone was significant, but recently it has spread to other regions of Asia and the damage has become even more serious. Therefore, JIRCAS has started research in 2011 to reduce the damage caused by sugarcane white leaf disease.

For the past 10 years until last year, JIRCAS conducted joint research with local institutions such as Khon Kaen University in northeastern Thailand, where the damage caused by white leaf disease is most serious. In some years, our researchers stayed in Thailand for more than nine months a year, while in other years, we invited local researchers to Japan to conduct research. Since the insects that transmit sugarcane white leaf disease are nocturnal, it is necessary to conduct surveys at night in order to count the number of vectors living in the fields. Naturally, insect repellents could not be used during this survey. Therefore, I had to struggle against the mosquitoes. Some mosquitoes can bite you even when you are wearing jeans, so you have to be careful with your legs too. However, the research was very enjoyable, as I sometimes saw giant water bugs, which we rarely see in Japan. For meals, I often ate at the university cafeteria and enjoyed a variety of menus in the food court style. At first, I brought a mini Thai dictionary with me, but before I knew it, all I had to do was to stand in front of and the vendor would give me a recommended menu. In northeastern Thailand, people have long been eating insects as a valuable source of protein. Even on campus, I often saw university students eating them as snacks. I tried many different kinds, but I particularly enjoyed the bamboo worm (Japanese name: Taketsutoga), which is like a shrimp cracker (ebisen) with a slight bamboo flavor.

As a result of our research, we have found that efforts to distribute disease-free seedlings are particularly effective. Therefore, we developed a technology to produce disease-free seedlings in the laboratory and mass-propagate them in fields where vector control measures are taken, and distribute them to farmers. This technology was tested to confirm its effectiveness, and was published as a manual in Thai (Hanboonsong et al. 2021a). In addition to organizing an international conference, we were also able to contribute to countermeasures in affected countries other than Thailand by producing an English version of the manual (Hanboonsong et al. 2021b). These manuals have already been introduced in Pick Up 265. In the future, we will conduct research to develop even more efficient countermeasures, such as the development of sugarcane resistant to white leaf disease, as well as disseminate information for use in more countries. We also hope to use our experience to research countermeasures against other pests that are spreading across national borders.