554. Enhancing the Function of Water Facilities at the African Farmer Level 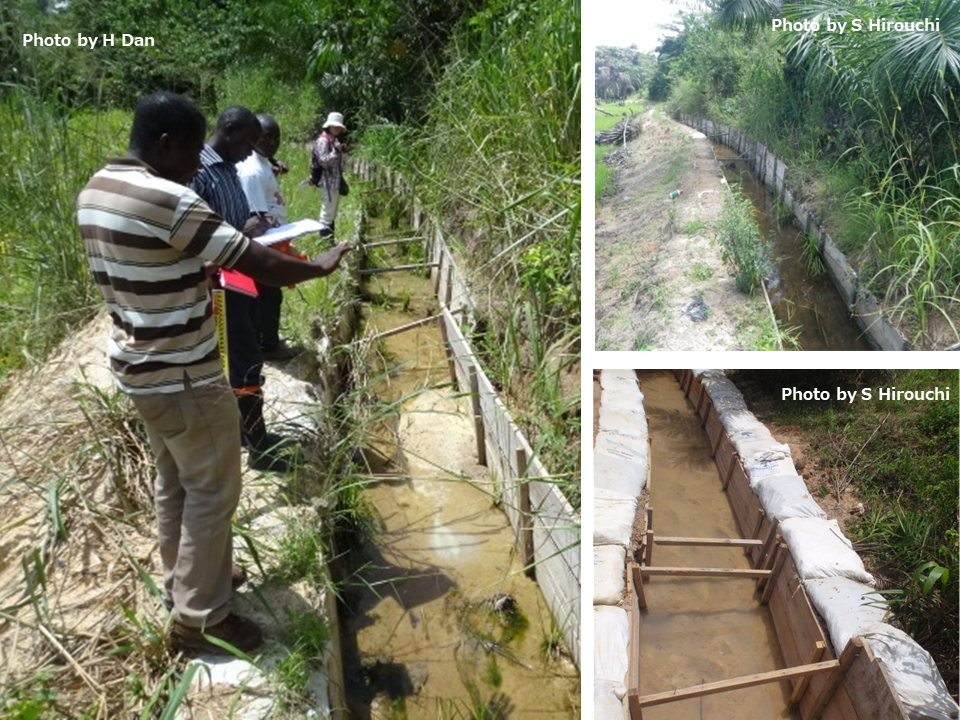 In Africa, poverty and food shortages are widespread due to slow economic development and high population growth rates. Especially in sub-Saharan Africa, rice imports from Asia and North America are increasing year by year to meet the growing domestic rice consumption. It is estimated that there are 20 million hectares of lowland areas in Africa suitable for rice cultivation. Efficient and sustainable rice cultivation in these low-humidity areas is essential to realize the goal of doubling rice production in Africa. However, it is commonly known that when strong rains typical of the tropical regions occur, runoffs and rainfall destroy water intake facilities, drainage canals, and levees.

Many of the agricultural water facilities in Africa that have been developed with farmer-level technology are earth canals (channels dug into the ground). Erosion of earth canals due to water runoffs and rainfall reduces the function of the channel (i.e., the flow of water necessary for paddy fields), and in the worst case scenario, irrigation is interrupted, making it impossible to plant rice. JIRCAS has studied several methods to enhance the functionality of earth canals that can be constructed by local farmers using their own technology and available capital (funds). Specifically, these methods include the use of wooden fence, native plants, and reinforcing the walls of earth canals with bricks made from local soil.

In collaboration with Kwame Nkrumah University of Science and Technology (KNUST), we have developed and released a manual (Manual for Improving Rice Production in Africa - Development of Low Cost Irrigation Facility Applicable to Africa) that will enable local farmers to construct low-cost irrigation facilities and perform long-term maintenance with their own capacity. This manual introduces inexpensive reinforcement measures such as the use of bricks made from local soil, cover-plants, and wooden fence that can be easily implemented by farmers.

We hope that this manual will contribute to the spread of rice production and increase the income of farmers not only in Ghana but also in other African countries.