On November 20, 2013, the commendation ceremony of the 2013 Japan International Award for Young Agricultural Researchers was held at the U Thant International Conference Hall, United Nations University, Tokyo, Japan.The ceremony was well attended by many participants, including members of the selection committee.

On November 20, 2013, the commendation ceremony of the 2013 Japan International Award for Young Agricultural Researchers was held at the U Thant International Conference Hall, United Nations University, Tokyo, Japan.

The ceremony was well attended by many participants, including members of the selection committee.

This is the seventh time that the award was presented by the President of the Agriculture, Forestry and Fisheries Research Council to young foreign researchers with outstanding achievements to promote research and development of agricultural, forestry, fishery and other related industries in developing regions. This year’s awardees and their research achievements are as follows: 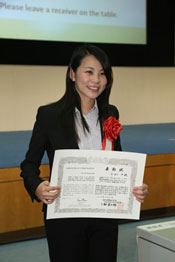 [Outline of Research Achievements]
New methods to match a timber log into its population and stump of origin would signify an important forensic component in the context of stolen log traceability for the control of illegal logging and also the approach in chain of custody developed for the certification of timber from sustainably managed forests. In Malaysia, foresters at the moment have to depend on wood anatomy evidence to link the suspected timber thefts to the source trees. But this is inadequate as identification could only be done on the group of trees and not to the species and individual levels. Therefore, the use of inbuilt unique properties of DNA within a timber could serve as an important technical element in forensic forestry to support the determination of identity and provenance. By using Neobalanocarpus heimii (chengal) as an example, we have developed a timber tracking system, which comprises of population and individual identification databases, using chloroplast DNA (cpDNA) and nuclear short tandem repeat (nSTR) markers. These databases could be applied for timber tracking in two different circumstances (1) to verify the provenance of wood lot in the context of forest certification and chain of custody certification, and (2) to identify the potential population of origin and its original stump for the suspected illegal harvested wood lot. 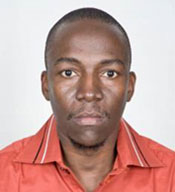 [Outline of Research Achievements]
Outline of Research Achievements
Cowpea is an important food legume widely cultivated in the semi-arid tropics where drought is a major limitation of crops productivity. However, the creation of improved cultivars is hampered by the lack of effective screening techniques and selection criteria. Therefore, an integrated and innovative approach is needed to revitalize the development of drought-adapted and high-yielding cultivars. In this regard, Dr. Belko conducted significant research in various environments such as field station, rain-out shelter, glasshouse, and growth chamber in Senegal and India with the objective to (i) develop high-throughput plant phenotyping methodologies, (ii) identify morpho-physiological drought-related traits, and (iii) select post-flowering drought tolerant and high-yielding cowpea cultivars. From his extensive work, Dr. Belko made significant achievement including (i) selection of several cultivars with higher yields and post-flowering drought tolerance, (ii) identification of key agro-physiological traits that are correlated with drought tolerance, and (iii) publication of several high impact research papers. The technologies developed from his work are now used in the breeding programs in Africa and the US. Currently, Dr. Belko is working to parameterize and test the robustness of a legume crop model to predict the effects of specific plant traits or traits combinations on the crop yields and to determine their probability of success in improving crop growth and yields across drought scenarios and environments in Africa. 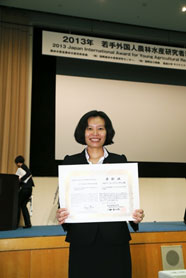 [Outline of Research Achievements]
Dr. Chantawannakul started her work with American foulbrood, the most fatal disease in honey bees. Her research revealed that the proteases from American foulbrood-infected cadaver of honey bee were metalloproteases and her experiments showed three patterns. These patterns of protease banding in different isolates can provide a means for distinguishing strains and will be of epizoological value in following the outbreak of  American foulbrood disease. Later, she surveyed bee diseases pest and parasites in Thailand and found that the bee industry has been affected by a fungal pathogen as well as Varroa and Tropilaelaps mites. Through observations, she discovered the relationship between virus, Varroa mite and bee. The discovery was made on the grounds that genetic materials of viruses were found in Varroa mites, which parasitized in bee. Therefore, Varroa mites could be a biological vector for viral transmission and it could cause the collapse of bee colonies due to the so-called  “bee parasitic mite syndrome.” Moreover, this study provides the first evidence for the co-existence of several bee viruses in a single mite and also the first report of bee virus in Thailand. This will help beekeepers to make an attempt to reduce mite population in their apiaries to contain viral transmission. Recently, concerns have been raised about chemical residue left in honey and antibiotics resistance of microbial pathogen. Her research has an orientation to use natural product to combat the bee diseases and pests. Her research has also focused on honey bee genomic analysis. Apart from European honey bee, which has been introduced to South East Asia for economic reasons, the study of ecological roles of other native bees in SEA also has been of interest. In recent years she has studied the bee diseases affecting native bees in both Thailand and Japan, and also the resistance mechanisms of Asian honey bees against bee diseases and parasitic mites. 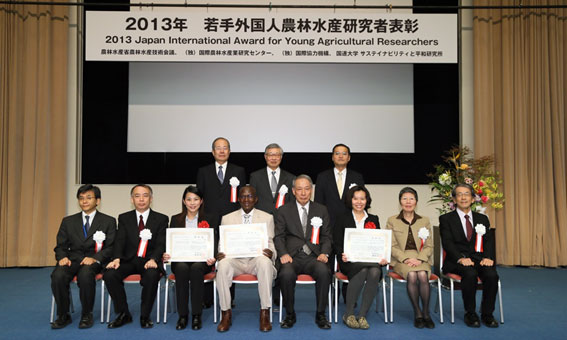 Awardees, members of the Selection Committee, and other officials