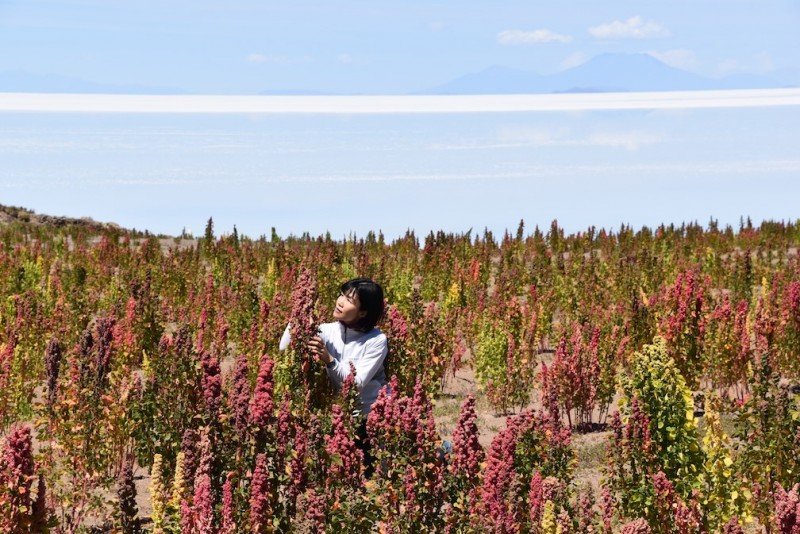 The Salar de Uyuni, a salt flat located in Bolivia, is dubbed as a "mirror of the sky" because it reflects the sky like a mirror. It is also known worldwide for its superb scenery that one should visit once in a lifetime.

Plants grow by absorbing water and nutrients from the soil. However, under conditions of high salt concentration in the soil, it becomes difficult for the roots to absorb water from the soil due to a difference in osmotic pressure and the plant dies eventually. Therefore, plants cannot generally survive in a salty environment. The areas around Salar de Uyuni covered in salt are barren lands devoid of any crops.

An extremely rare crop that grows in such a severe environment, quinoa (Chenopodium quinoa) has recently attracted attention as a “superfood”. It has been cultivated for more than 7,000 years in the Andes region with an altitude of more than 3,500 meters and revered as the "mother grain" of the Inca Empire (Jarvis et al. 2017). In recent years, the nutritional value of quinoa has been highly evaluated due to its gluten-free, low GI value (Glycemic Index), which is an exquisite combination of amino acids, fiber, lipids, carbohydrates, vitamins and minerals. With the United Nations’ designation of 2013 as the “International Year of Quinoa” and NASA’s endorsement of quinoa as an ideal food for long duration space flights, the demand for this healthy and functional food has increased rapidly worldwide. Recently in Japan, quinoa has become available not only in stores that sell healthy foods and imported products but also in supermarkets and is now used as ingredient in salad recipes. On the other hand, not so many people think of quinoa as a crop. Historically, quinoa cultivation was suppressed by the Spanish conquerors in the 16th century because of its use in indigenous religious ceremonies. Therefore, compared with potato and tomato, which also originated from the Andes, the improvement of quinoa to stabilize the yield did not progress and a system for continuous mass production was not established.

Many crops around the world have excellent nutritional value like quinoa, but in the process of adapting to the environment peculiar to the region, sufficient research has not been conducted to develop improved varieties that could lead to spread beyond the region. These crops are also called “underutilized crops” or “orphan crops” (Kamei et al. 2016).

Behind the development of agriculture, many years of research efforts have been made to cultivate wild crops and establish breeding and cultivation methods to stabilize the yield. The dramatic growth in productivity of the world's major staple and oil crops such as rice, wheat, corn, and soybeans has been achieved as a result of extensive research efforts. Over the past fifty years, the growing westernization of diets, national food supplies worldwide became more similar in composition, correlated particularly with an increased supply of a number of globally important cereal and oil crops, and a decline of other cereal, oil, and starchy root species. The increase in homogeneity of the food supply worldwide thus has resulted in the loss of species-richness globally. From a genetic diversity perspective, increasing homogeneity in global food supplies highlights the importance of the breeding and cultivation of varieties of these crops with diverse genetic backgrounds (Khoury et al. 2014There is also concern that it could lead to the loss of diversity of crops, especially those which have been globally underutilized but have supported food and nutrition security in national/local contexts. Amid growing global awareness of the urgency of conservation of crop gene diversity, attention is also focused on the importance of elucidating the mechanism of resilience among orphan crops originating from severe and marginal agricultural environments from the perspective of adaptation to climate change (Mabhaudhi et al. 2019).

In collaboration with Kyoto University and Kazusa DNA Research Institute among others, JIRCAS has succeeded in deciphering the complete genome of quinoa for the first time in the world (Yasui et al. 2016). In FY2020, JIRCAS will start to collaborate with Bolivia’s Higher University of San Andres (UMSA) and the agricultural research extension organization PROINPA, Kyoto University, Obihiro University of Agriculture and Veterinary Medicine, and Tokyo University of Agriculture and Technology in a SATREPS project entitled “Strengthening of resilience in arid agro-ecosystems vulnerable to climate change through research on plant resources and technological applications”. This project is aimed at gaining insights into breeding strategies as countermeasures against climate change by clarifying the mechanism of crops that adapt to severe environment and climate conditions, as well as for developing improved and high value-added quinoa varieties. 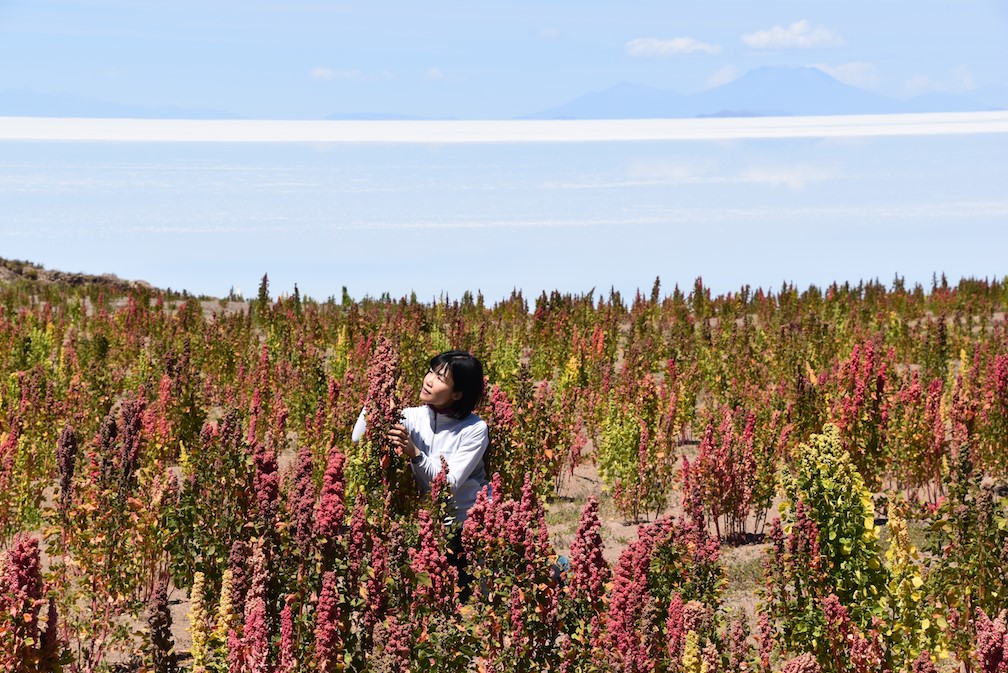 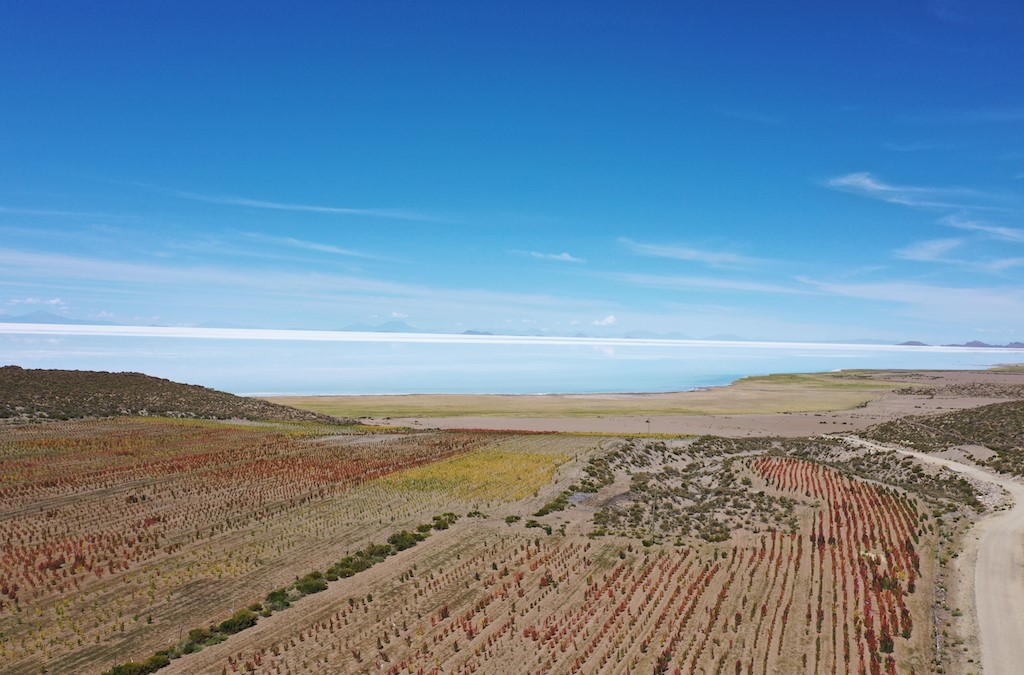 Quinoa fields in the areas near Salar de Uyuni 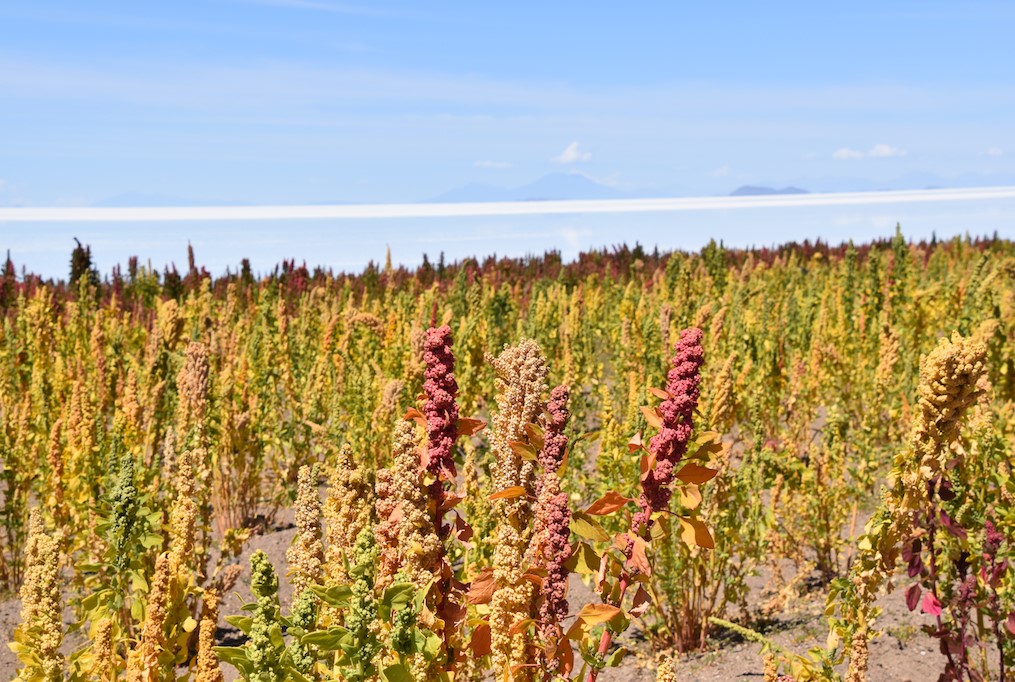 Quinoa crop in the field