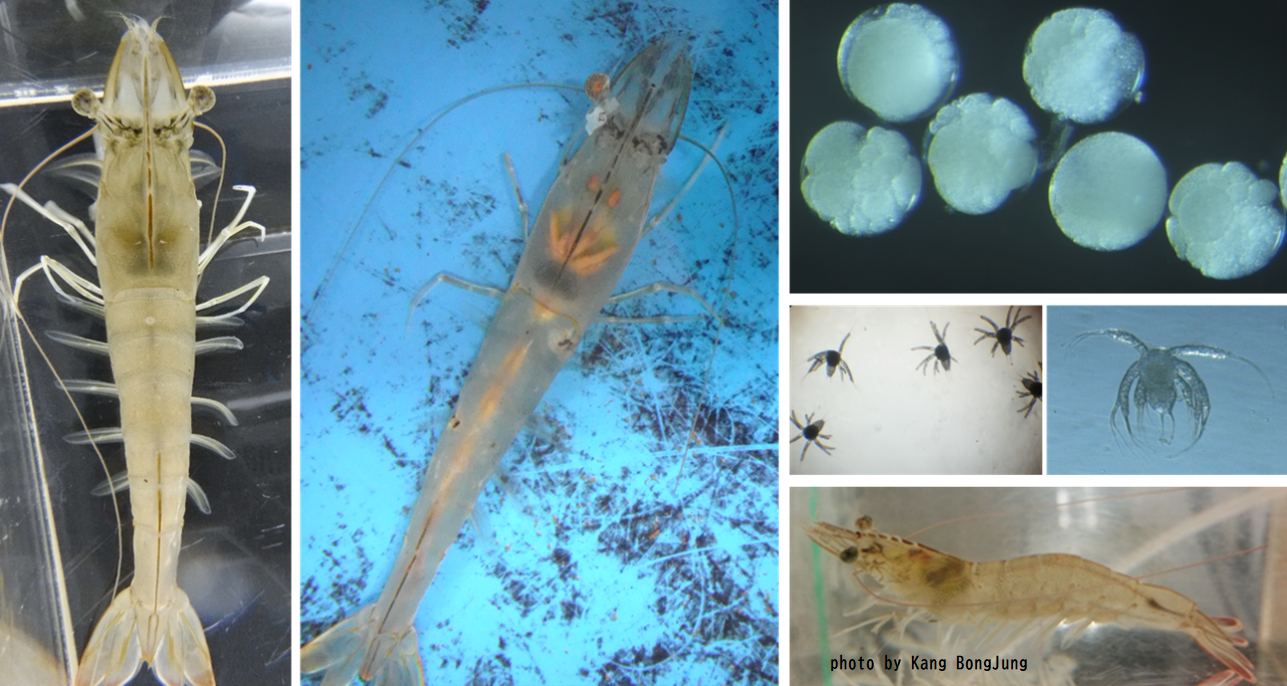 There are many species of shrimps, but the most widely cultivated shrimps in the world are whiteleg shrimp, black tiger, and kuruma shrimp of the family Penaeidae. Among them, the whiteleg shrimp accounts for 80% of the world's shrimp farming production. The whiteleg shrimp is found in the Pacific region of Central and South America, but unlike the kuruma shrimp, it does not have the habit of burying in the sand, so it is highly amenable to aquaculture and is actively cultured in Southeast Asia. The global shrimp farming industry is growing every year, with production now reaching over 5 million tons, which is more than half of all the edible shrimp consumed in the world.

In order to support such a huge shrimp farming industry, it is necessary to produce a large number of young shrimp. For this reason, hatcheries use a process called eyestalk ablation, in which one of the eyestalks of the female parent shrimp is excised. In crustacean eyes, there is a tissue called the X-organ/Sinus gland complex that secretes important hormones, which in turn secrete factors that inhibit egg maturation. Eyestalk ablation stimulates the maturation process of female shrimp and facilitates spawning, but the effect disappears in about 3 to 4 months, so new parent shrimps must be used to perform eyestalk ablation and produce larval shrimps. This production method puts a heavy burden on the parent shrimp and is not very efficient. In recent years, the problem has been pointed out from the viewpoint of animal welfare, and there is a growing demand for the development of a new method of producing juvenile shrimps to replace eyestalk ablation.

At JIRCAS, we are promoting research to develop a new maturation promoting technology that is more efficient and animal-friendly. In order to control inhibitors in the body based on biological findings, we first clarified the fluctuation patterns of vitellogenesis-inhibiting hormone (VIH), a maturation inhibitor, in the body. We also developed and patented a new technology that interferes with gene expression in the shrimp body to stop the synthesis of VIH (Japan Patent Office, Patent No. 6789513). At present, we are conducting joint research with a private company in Thailand to verify the effectiveness of this technology in a commercially-operated hatchery for practical use

Use of RNA interference to suppress gene expression of vitellogenesis-inhibiting hormone in the whiteleg shrimp, Litopenaeus vannamei In: JIRCAS ResearchHighlights 2019