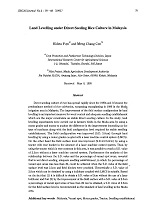 Direct seeding culture of rice has spread rapidly since the 1980s and it became the predominant method of rice cultivation, surpassing transplanting in 1986 in the Muda irrigation area in Malaysia. The improvement of the field surface configuration by land levelling is an important measure for weed control and adequate seedling establishment which are the major constraints on stable direct seeding culture. In the study, land levelling experiments were carried out in farmers' fields in the Muda area by using a motor grader and tractor to analyze the difference in the improvement depending on the type of machines along with the field configuration level required for stable seedling establishment. The field configuration was improved (S.D. 3.8cm) through land levelling by using a motor grader coupled with a laser machine control system (LMCS). On the other hand the field surface level was improved (S.D.:2.2-3.2cm) by using a tractor with rear bucket in the absence of a laser machine control system. Thus, by using the tractor which is very common in this area, it was possible to reach a S.D. value of 2.5cm without a laser machine control system. Furthermore the analysis of the relationship between the S.D. value and the percentage of vacant spot areas, revealed that in wet direct seeding, adequate seedling establishment, in which the percentage of vacant spot areas was less than 4%, could be achieved when the S.D. value of the field surface level was 2.5cm and field ditches were provided. Theoretically a S.D. value of 2.0cm which can be obtained by using a bulldozer coupled with LMCS is suitable. Based on the fact that (1) it is difficult to obtain a S.D. value of 2cm without the use of a laser bulldozer and that (2) by the improvement of the field surface with a S.D. value of 2.5cm a percentage of vacant spot areas of less than 4% can be attained, a S.D. value of 2.5cm for the field surface level is recommended as the standard of land levelling in the Muda area.