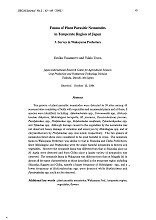 Ten genera of plant parasitic nematodes were detected in 39 sites among 45 surveyed sites consisting of fields with vegetables and ornamental plants and of these, 5 species were identified, including Aphelenchoides spp., Criconemella spp., Helicotylenchus dihystera, Meloidogyne incognita, M. javanica, Paratrichodorus porosus, Paratylenchus, spp., Pratylenchus spp., Rotylenchulus reniformis, Tylenchorhynchus spp. and Tylenchus spp. Although damage caused to the vegetables by the nematodes was not observed, heavy damage of carnation and sweet pea by Meloidogyne spp. and of chrysanthemum by Pratylenchus spp. was noted, respectively. The two genera of nematodes listed above were considered to be most harmful to crops. The nematode fauna in Wakayama Prefecture was similar to that in Shizuoka and Chiba Prefectures, since Meloidogyne and Pratylenchus were the major harmful nematodes to flowers and vegetables. However the nematode fauna was different from that in Shizuoka since no M. hapla were detected and from Chiba since a larger variety of nematodes was observed. The nematode fauna in Wakayama was different from that on Ishigaki Isl. in almost all the same characteristics as those described in the temperate region including Shizuoka, Kagawa and Chiba, namely a larger frequency of Meloidogyne spp., and a lower frequency of Helicotylenchus spp. were detected while Hoplolaimus and Paratrophulus spp. could not be observed.