Fauna of Plant Parasitic Nematodes in the Temperate Region of Japan 1.Surveys in Shizuoka and Kagawa Prefectures 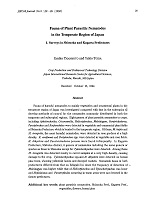 Fauna of harmful nematodes to mainly vegetables and ornamental plants in the temperate region of Japan was investigated compared with that in the subtropics to develop methods of control for the nematodes commonly distributed in both the temperate and subtropical regions. Eight genera of plant parasitic nematodes to crops, including Aphelenchoides, Criconemella, Helicotylenchus, Meloidogyne, Paratrichodorus, Paratylenchus and Rotylenchulus were detected in vegetable and ornamental plant fields of Shizuoka Prefecture which is located in the temperate region. Of these, M. hapla and ,M. incognita, the most harmful nematodes, were detected in rose gardens at a high density. R. reniformis and Pratylenchus spp. were detected in vegetable and rose fields. H. dihystera and Paratrichodorus porosus were found infrequently. In Kagawa Prefecture, Shikoku district, 6 genera of nematodes including the same genera or species as those in Shizuoka except for Tylenchorhynchus were detected. Among these M. incognita was detected mostly in carrot samples at a very high density, causing damage to the crop. Tylenchorhynchus spp.and H. dihystera were detected on bonsai pine trees, showing yellowish leaves and decayed rootlets. Nematode fauna in both prefectures differed from that on Ishigaki Isl. since the frequency of detection of Meloidogyne was higher while that of Helicotylenchus and Tylenchorhynchus was lower and Hoplolaimus and Paratrophulus occurring in warm areas were not detected in the former prefectures.