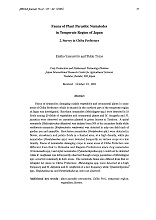 Fauna of nematodes damaging mainly vegetables and ornamental plants in some areas of Chiba Prefecture which is situated in the northern part of the temperate region of Japan was investigated. Root-knot nematodes (Meloidogyne spp.) were detected in 18 fields among 29 fields of vegetables and ornamental plants and M. incognita and M.javanica were observed on carnation planted in green houses at Tomiura. A spiral nematode (Helicotylenchus dihystera) was isolated from 50% of the cucumber fields while reniformis nematode (Rotylenchulus reniformis) was detected in only one field each of garden pea and amaryllis. Root-lesion nematodes (Pratylenchus spp.) were detected in flower, strawberry and potato fields in a limited area, at a high density, while pin nematodes (Paratylenchus spp.) were detected frequently on various crops at a low density. Fauna of nematodes damaging crops in some areas of Chiba Prefecture was different from that in Shizuoka and Kagawa Prefectures since ring nematodes (Criconemella spp.) and stylet nematodes (Tylenchorhynchus spp.) could not be detected while R. reniformis was infrequently observed though a large population of Meloidogyne spp. occurred commonly in both areas. The nematode fauna also differed from that on Ishigaki Isl. since in Chiba Prefecture Meloidogyne spp. were detected at a high frequency and H. dihystera and R. reniformis at a low frequency while Tylenchorhynchus spp., Hoplolaimus sp. and Paratrophulus sp. were not observed.