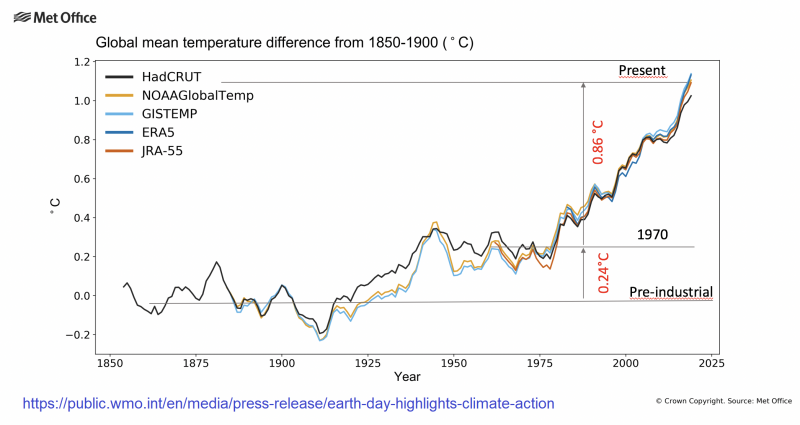 The World Meteorological Organization (WMO) published the "Global Climate 2015–2019" report on April 22, 2020 to mark the 50th anniversary of Earth Day. A preliminary version was issued ahead of the United Nations Secretary-General’s Climate Action Summit in September 2019. According to the report, the physical signs of climate change and the impact on our planet  have gathered pace, reaching a crescendo in the past five years. This trend is expected to continue  and Whilst COVID-19 has caused a severe international health and economic crisis, failure to tackle climate change may threaten human well-being, ecosystems and economies for centuries Below is an overview of this report and blog (WMO April 22, 2020).

The five-year period 2015–2019 is likely to be the warmest of any equivalent period on record globally, with a 1.1 °C global temperature increase since the pre-industrial period and a 0.2°C increase compared to the previous five-year period. The average global temperature has increased by 0.86°C since the 1970s,Carbon dioxide (CO2) levels and other key greenhouse gases in the atmosphere rose to new records, with CO2 growth rates 18% higher in 2015-2019 than the previous five years. The rise in greenhouse gas emissions has led to the acceleration of rising sea levels, a continued decline in the Arctic sea-ice extent, an abrupt decrease in Antarctic sea ice, continued ice mass loss in the glaciers and the Greenland and Antarctic ice sheets, and the clear downward trend in the northern hemisphere spring snow cover, and frequent heat waves and forest fires. Floods create an environment that causes outbreaks of epidemics, with nearly 1.3 billion people at risk of cholera infections. It is estimated that 40 million people in Africa alone live in cholera “hot spots”.

Climate change causes tremendous socio-economic damages. The  costliest disasters are tropical cyclones associated with floods and landslides, with Hurricane Harvey in 2017 costing an economic loss of more than $125 billion. The risks associated with climate change have also threatened food security in many countries, especially in Africa, through droughts and floods. Higher temperatures can threaten to undermine development through adverse impacts on  the GDP of developing countries. WMO quoted the International Monetary Fund's (IMF) analysis in its blog, stating that for a median-and low-income developing country, with an annual average temperature of 25°C, the effect of a 1°C increase in temperature leads to a growth decrease of 1.2%. Countries whose economies are projected to be significantly adversely affected by an increase in temperature produced only about 20% of global GDP in 2016; however, they are currently home to nearly 60% of the global population and are projected to be home to more than 75% by the end of the century. Therefore, their negative impacts of climate change to those countries will affect the global economy.

A new global mean temperature record is likely to occur in the next five-year period (2020-2024), according to multi-model climate predictions COVID-19 may result in a temporary reduction in greenhouse gas emissions, but it is not a substitute for sustained climate action. And it will make it more difficult to tackle weather, climate and water-related hazards which are becoming more acute because of climate change. COVID-19 is an international health and economic crisis, but human society, ecosystems, and economies could face a crisis for centuries if the world is not united in the same way to address climate change. Traditionally, post-crisis recovery has been accompanied by a rise in greenhouse gases, but post-COVID-19 economic stimulus measures should be aimed at helping the economy grow back greener.