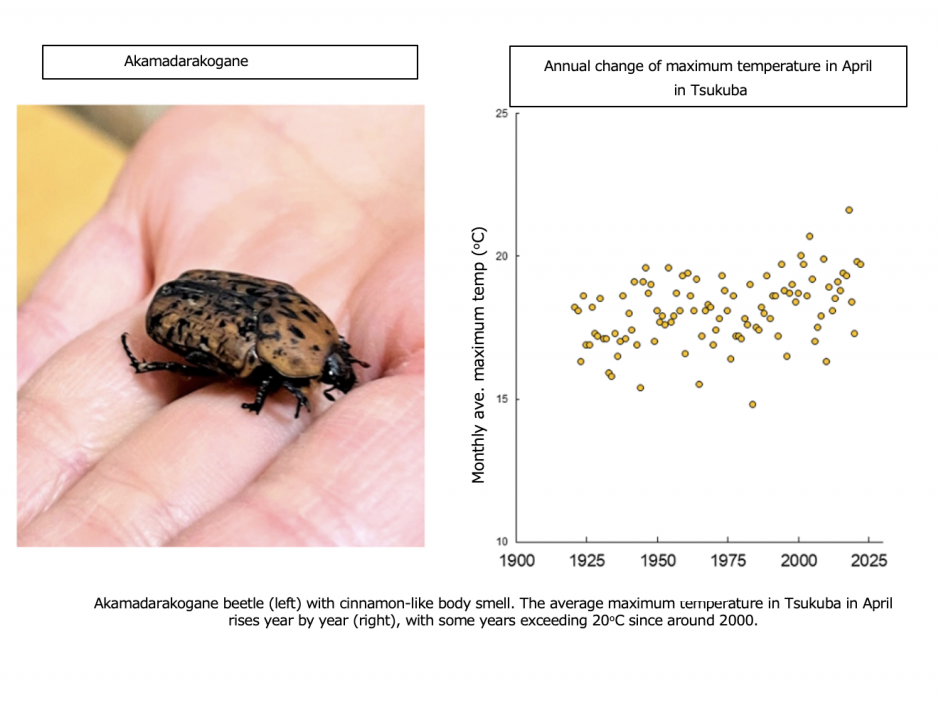 Today I would like to consider climate change and biodiversity from a familiar issue in Tsukuba, where JIRCAS is located.

In early April, I caught an rare insect on the stairs of a building in central Tsukuba. This insect is called ‘akamadarakogane’ beetle (Poecilophilides rusticola), which until 50 or 60 years ago was a common beetle. Recently, however, the number of these beetles has been rapidly declining, and even the mere fact of catching one makes the news. So why has the number decreased so much? Since the beginning of the 2000s, the mysterious ecology of this beetle has been revealed, and the reason for its declining population has finally been clarified.

In fact, akamadarakogane beetle lays its eggs and grows mainly in the nests of birds of prey such as the goshawk. The larvae that emerge from the eggs seem to be growing by secretly feeding on the meat and decayed matter left behind by the chicks. In other words, the raptor nests provide the perfect hiding place for the larvae, where they can hide from other birds and other natural enemies, and where they can also feast on their food. Over its long evolutionary history, the akamadarakogane beetle has survived by adopting such an interesting way of life. However, due to deforestation caused by human activities, the habitat environment for raptors has deteriorated and their populations have declined rapidly, and the akamadarakogane beetles have also fallen with them and disappeared from many areas. Fortunately, around Tsukuba, efforts are being made to protect the forests where goshawks and other birds live, and the habitats of raptors are being maintained. It is likely that the akamadarakogane beetle also managed to survive and fly in the forests in the surrounding area.

Regarding this particular akamadarakogane beetle, I found out that the time it was caught was quite early in comparison with previous records. Adults of the akamadarakogane beetle hibernate during the winter and fly away from their nests in search of tree sap to feed on in the spring when the temperature rises. In Tsukuba, temperatures have been rising year after year due to climate change, and this spring was also hotter than normal. The temperature on the day it was caught was over 27°C and and the weather had been abnormal with many extremely hot summer days recorded in the previous week. Such changes in behavior patterns due to abnormal weather can have a variety of effects on the survival of many organisms, including insects. For example, if they wake up too early from hibernation and start looking for food, they may starve to death because they could not get enough sap, which is the key to survival. Thus, there is concern that climate change will affect the survival of organisms in unexpected places around the world, leading to loss of biodiversity. In the future, it is imperative that climate change mitigation and adaptation measures be promoted to conserve biodiversity.

Makihara H, Tanaka K (2022) Akamadarakogane beetle caught on the eighth floor of a building in the urban area of Tsukuba, Ibaraki Prefecture in Japan during the spring season. Coleopterological Society of Japan Sayabane New Series 47: 22-23 (In Japanese)