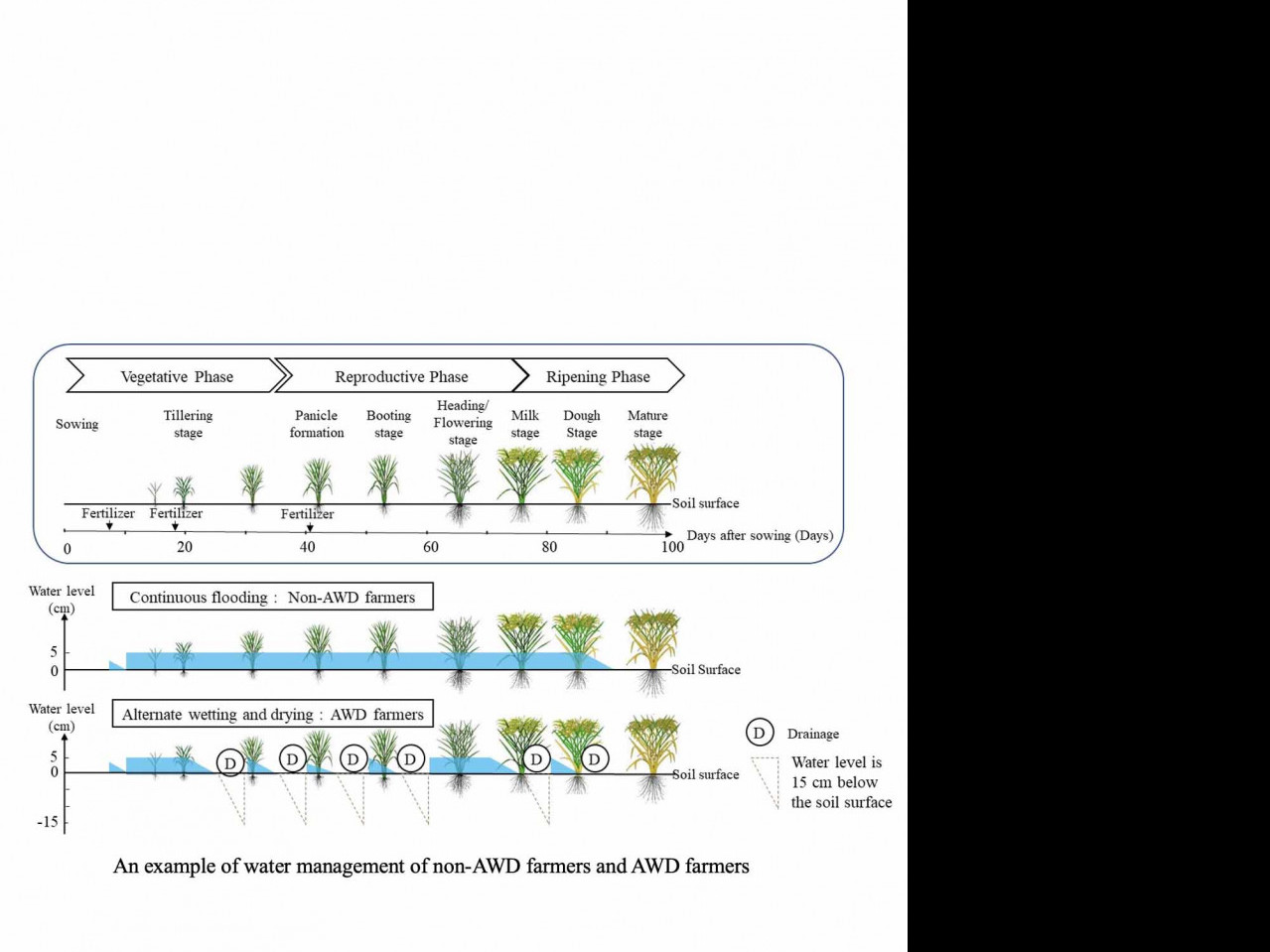 The Mekong Delta, located in southern Vietnam, is the country's largest rice-growing region, with fertile lowlands and abundant rainfall. In recent years, rice cultivation has expanded due to the improvement of rice varieties and the construction of a full-dike system to prevent flooding, which has led to the cultivation of three-season crops. While increasing rice acreage is an effective means of meeting food demand, measures are needed to address greenhouse gas (GHG) emissions, including methane, and water demand.

In rice paddies, the soil  becomes an anaerobic environment without oxygen, and anaerobic microorganisms produce methane, which is released into the atmosphere. In Japan, it is well known that the use of "Nakadoshi" (mid-season drainage), in which water is removed from rice paddies and the soil is allowed to dry out for about 7-14 days approximately one month after transplanting (the number of stems become about 80% of the target number of stalks) , is effective in suppressing methane production. On the other hand, alternate wetting and drying (AWD) is a water management technique in which the paddy soil is reflooded to a depth of 5 cm after several days of drying when the water table reaches approximately 15 cm below the soil surface, except for 10 days from 10 to 20 days after seeding and for during the fertilizer application period and flowering period in one crop season. This technique supplies oxygen to the soil and reduces methane emissions, and is therefore attracting attention as a technology that simultaneously reduces irrigation water consumption and GHG emissions in Asia-Monsoon region where multiple cropping seasons are practiced.

Based on the MeaDRI Strategy and the Global Methane Pledge, JIRCAS is conducting research aimed at further promoting AWD in the Asia-Monsoon region to contribute to climate change adaptation. Many researchers, including those from JIRCAS, have reported the advantages of AWD, such as reduced methane, reduced irrigation pump operation costs, and increased yields. On the other hand, the increase in dinitrogen monoxide and additional cost of operating drainage pumps during the rainy season have been reported as the disadvantages of AWD. However, there have been few evaluations that comprehensively consider the impact of AWD on farmers' profits and GHG emissions, and the merits of year-round implementation have not been clear.

Therefore, JIRCAS conducted an evaluation of the benefits of year-round AWD implementation on farm households and GHG emission reductions using farm household survey data from An Giang Province in the Mekong Delta region of Vietnam. Here, the GHG emission reduction benefits were calculated using a life cycle assessment. The results showed that when AWD was implemented throughout the year, farmers' profits increased by 6% compared to farmers who did not implement AWD, and GHG emissions were reduced by 38%.

As the reduction of methane emissions from paddy rice cultivation has become an issue, the results obtained in this study can be used as supporting data for the effectiveness of year-round AWD implementation as an agricultural system with co-benefit that both increases farmers' profits and reduces environmental impacts from agriculture, and is expected to be a promising mitigation and adaptation measure for climate change in the Asia-Monsoon region.

The results of this study were published in the online edition of Journal of Cleaner Production on April 4, 2022 (JST).