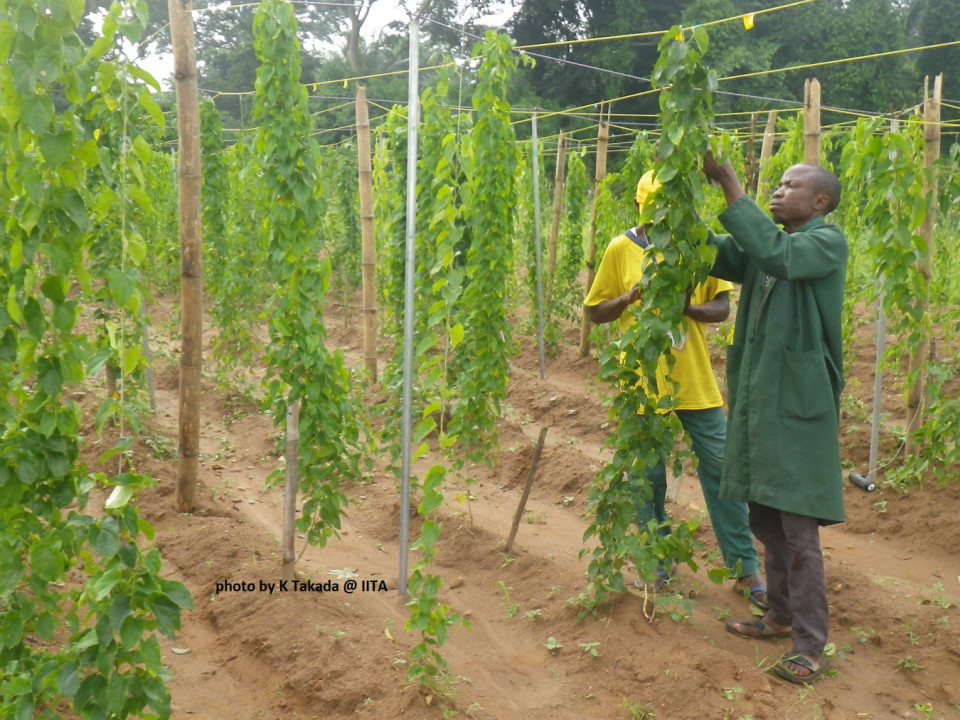 Approximately 75 million tons of yams are produced annually in tropical and subtropical regions of the world, and more than 90% of these are important crops used as staple foods and cash crops in West Africa, a developing region. Yams include ‘nagaimo’ and ‘jinenjo’, which are familiar to Japanese people, but the species and cultivation methods used in West Africa are very different from those used in Japan. Farmers in developing regions find it difficult to use agricultural materials such as chemical fertilizers because they are expensive, so there is a need to develop a technology that can secure tuber yields with low fertilizer inputs. Previous studies on the effect of fertilizer application on yams have reported that fertilizer application increased yields, but it was also found that there are varieties that can produce yields without chemical fertilizer application. In recent years, research has focused on the effect of symbiotic bacteria on the growth of yams, particularly nitrogen fixation.

Nitrogen fixation is one of the plant growth-promoting effects of microorganisms, and is a reaction in which atmospheric nitrogen is fixed and converted into nitrogen compounds that can be used by plants through the action of enzymes possessed by symbiotic microorganisms. Plants in symbiosis with nitrogen-fixing microorganisms can grow even in soils with low nitrogen content because of this action. The representative nitrogen-fixing microorganisms are rhizobacteria of the legume family, but recent studies have reported that nitrogen fixation by symbiotic bacteria contributes to the growth of crops other than legumes, such as sugarcane and sweet potatoes.

To explore the possibility of biological nitrogen fixation in yams, we examined the percentage of nitrogen absorbed by yams from the atmosphere through nitrogen fixation and found that in cultivars with a high involvement of nitrogen fixation, nearly half of the nitrogen absorbed was actually from the atmosphere (Takada et al. 2019a). In addition, culture experiments and molecular biological analysis confirmed that numerous nitrogen-fixing bacteria, including leguminous rhizobacteria, are symbiotic in yam stems, roots, and rhizosphere soil (Takada et al. 2019b, Kihara et al. 2022), and some of the bacteria were found to promote yam growth and tuber production (Liswadiratanakul et al. 2021). The results of these studies are expected to lead to the selection of yam varieties that can be grown without fertilizers, their use as breeding materials, and the development of next-generation agricultural materials that utilize the power of microorganisms. Reduction of cultivation costs by reducing the application of chemical fertilizers is expected to reduce the burden on farmers and lead to sustainable agricultural management.

About Guinea yam and EDITS-Yam project

240. JIRCAS’ Efforts toward the Utilization of Yam Genetic Resources