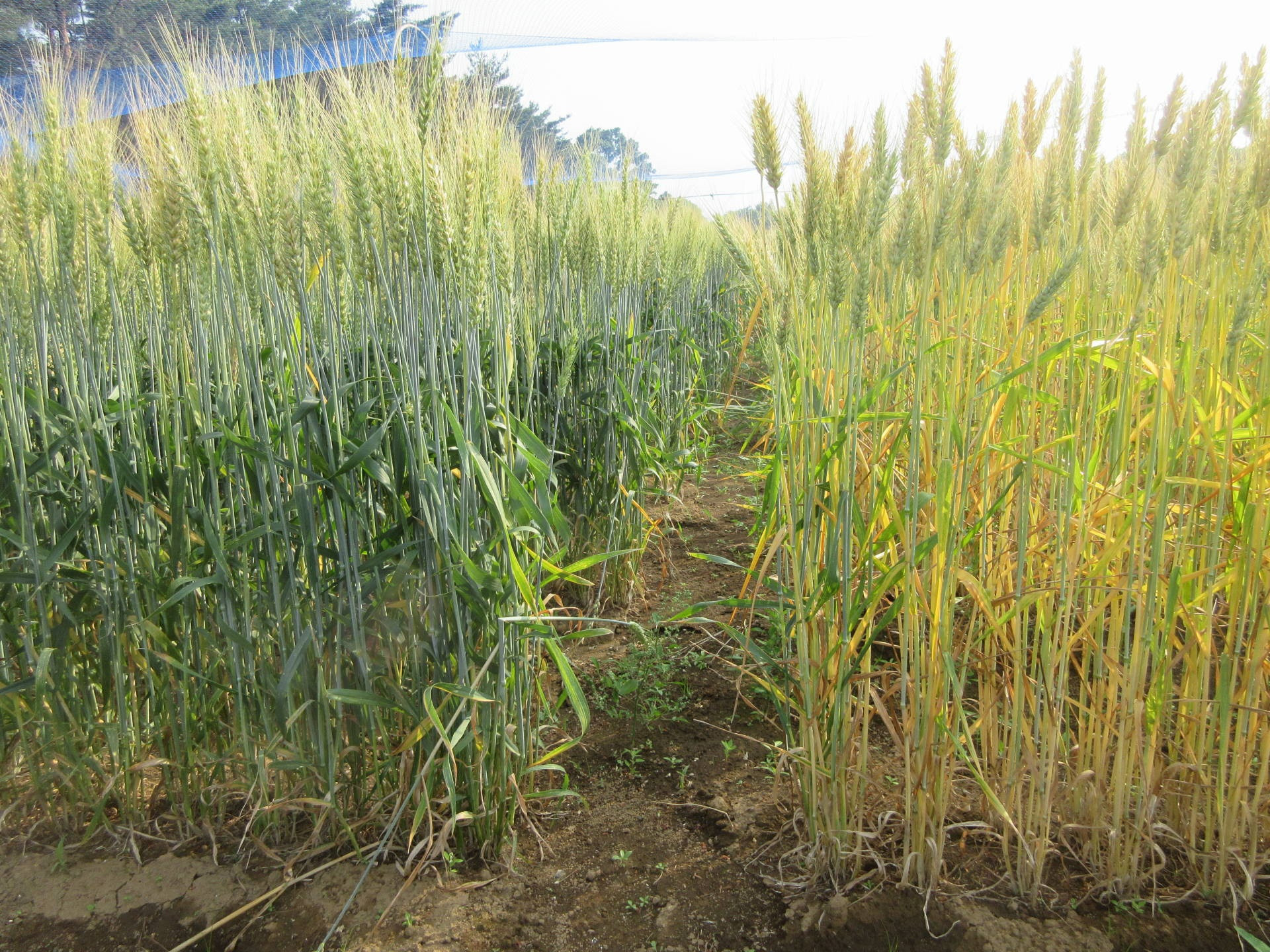 The planetary boundary proposed by Rockstrom et al, director of the Stockholm Resilience Center in 2009, stated that climate change, biodiversity, land use change, and biogeochemical cycling of nitrogen are already in crisis. Agriculture, which produces food, is involved in all these crises. The deforestation that accompanies the expansion of agricultural land causes the extinction of species, while carbon dioxide, nitrous oxide from the excessive use of chemical fertilizers, and methane from livestock and rice paddies are each emitted.

The Paris Climate agreement requires 80% reduction in GHG emission by 2050, and the world's population expected to grow to nearly 10 billion by 2050, major breakthroughs are needed to minimize the environmental burden without sacrificing the productivity of the food system, which is essential for food security. This requires technologies that efficiently utilize the potential of crops while scientifically understanding the interaction between crops, soil, and soil microflora in the global material cycle.

Biological Nitrification Inhibition (BNI) technology is a technology that utilizes the phenomenon that crop itself inhibits nitrification by nitrifying bacteria in the soil, the oxidation of nitrogen fertilizer to nitrate nitrogen. "Nitrification" converts nitrogen fertilizer into nitrate-nitrogen, which is not adsorbed onto soil particles, and thus, along with leaching and runoff, and nitrous oxide, which has a 298 times powerful greenhouse effect than CO2, is generated. Therefore, by utilizing BNI, nitrogen can be efficiently utilized by crops with less nitrogen fertilizer. As a result, nitrate-nitrogen leaching and runoff will be reduced, and nitrous oxide emissions will also be suppressed.

JIRCAS, in collaboration with the International Maize and Wheat Improvement Center (CIMMYT), the University of the Basque Country, and the College of Bioresource Sciences, Nihon University, has developed a high yielding BNI-enabled wheat by intergeneric crossing with Leymus racemosus, a wheat related wild-grass with high BNI capacity. The results of this study were published in the online edition of the prestigious scientific journal, Proceedings of the National Academy of Sciences of the United States of America (PNAS) on August 24, as August 31 edition. BNI-enabled wheat reduces the nitrification of soil, and nitrous oxide emissions and does not reduce the grain yield in low nitrogen fertilization environment, and there is no difference in grain protein content or bread-making characteristics.

BNI-enabled wheat has the potential to achieve carbon neutrality in wheat production systems in both developed and developing countries. In Japan, BNI-enhanced wheat was mentioned as a promising technology in the "Development and diffusion of earth-friendly super varieties that reduce greenhouse gases and water pollutants" section of the Strategy for Sustainable Food Systems, MeaDRI released by the Ministry of Agriculture, Forestry and Fisheries (MAFF) in May, which aims to achieve both improved productivity and sustainability of the food, agriculture, forestry and fisheries through the innovations. BNI-enabled wheat, including BNI-enabled crops were also mentioned as a promising mitigation technology in A Pathway to Carbon Neutral Agriculture in Denmark, published by the World Resources Institute (WRI) in May, which recommends introduction of BNI-enabled wheat as a promising mitigation technology.

JIRCAS will promote BNI research together with the BNI International Consortium, which has been formed with research institutions around the world. In addition, by developing BNI-enhanced wheat that meets the needs of India, the world's second largest wheat-producing country, we plan to establish a wheat cultivation system with excellent nitrogen use efficiency using BNI technology.

In the future, we aim to reduce nitrogen loss, which is an environmental burden from modern agriculture, and improve productivity while mitigating global warming by adding the BNI capacity derived from wild grass, Leymus racemosus, to various wheat varieties for the world's approximately 225 million hectares of wheat production area. 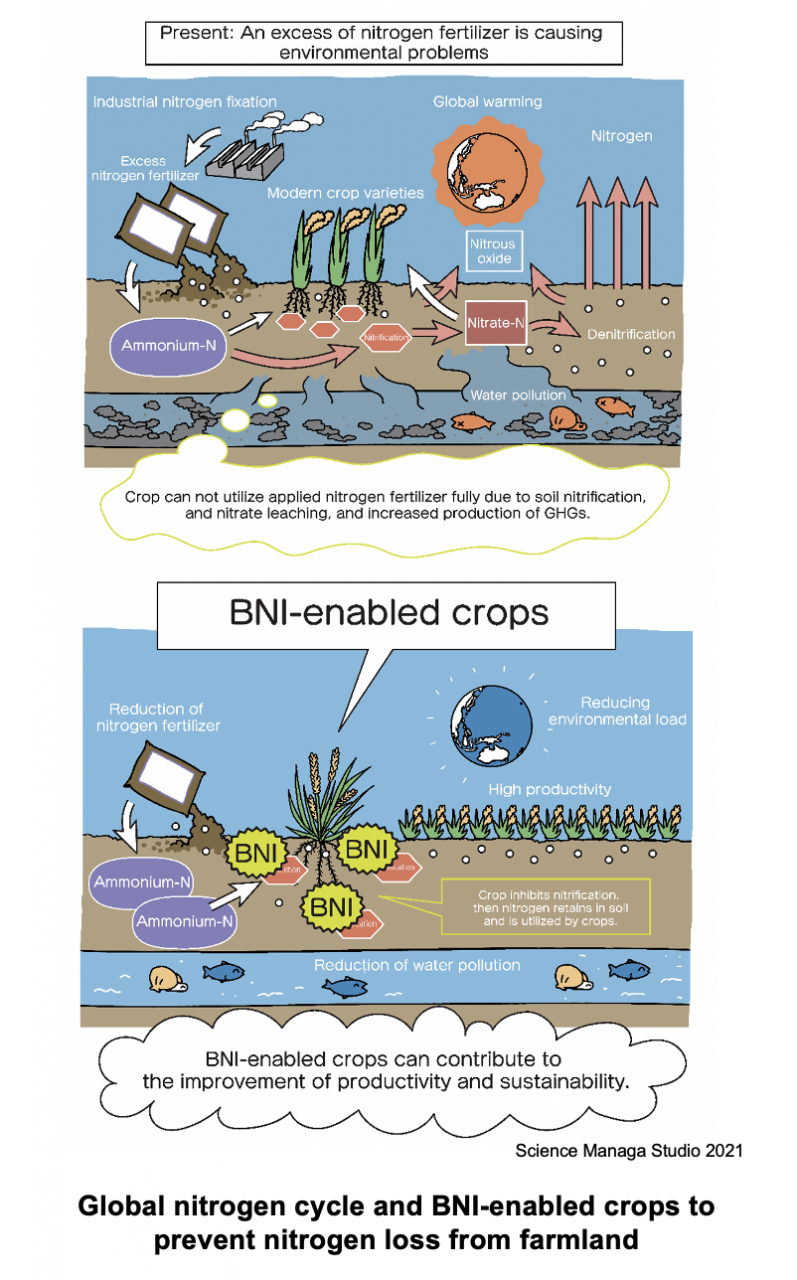