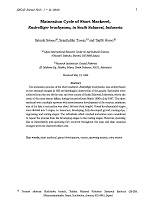 The maturation process of the short mackerel, Rastrelliger brachysoma, was studied based on the seasonal changes in GSI and histological observation of the gonads. Specimens were collected from the sea off the east and west coasts of South Sulawesi, Indonesia, where the onset of the rainy season differs, during the period from March 1996 to July 1997. The short mackerel was a multiple spawner with asynchronous development of the oocytes; minimum size of the fish at maturation was about 140 mm (fork length). Gonad developmental stages were divided into 7 stages; i.e. immature, developing, fully-developed, gravid, running-ripe, regressing, and resting stages. The individuals which reached maturation were considered to repeat the process from the developing stages to the resting stages. However, spawning fish or immediately post-spawning fish occurred throughout the year, and clear seasonal changes were not observed either area.