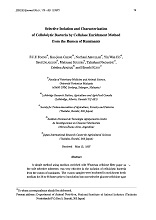 A simple method using medium enriched with Whatman cellulose filter paper as the sole selective substrate, was very effective in the isolation of cellulolytic bacteria from the rumen of ruminants. The rumen samples were incubated in enrichment broth medium for 36 to 96 hours prior to inoculation into non-selective glucose-cellobiose agar roll tubes. Of the 120 colonies picked from these roll tubes in Canadian study, 45 were found to be cellulolytic. The 36 out of 90 colonies obtained from the water buffalo samples in the Malaysian study were cellulolytic. Similarly, 260 out of 420 colonies picked in the Japanese study were cellulolytic. The 10 out of 16 colonies in the Argentinian study were cellulolytic. Most of these cellulolytic bacteria were identified as Fibrobacter succinogenes. Ruminococcus flavefaciens was found less frequently, and no Ruminococcus albus was isolated. None of the colonies were contaminated with cells of Treponema species, but contamination by Butyrivibrio species was noted. The method described in this paper is effective, requires less time than the conventional cellulose agar method or soluble carbohydrates-agar medium, and is superior to the latters because pure colonies of F.succinogenes are detected as being cellulolytic in broth cellulose medium whereas they escape detection by conventional cellulose agar method because they fail to produce clear zones.