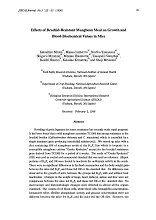 Breeding of grain legumes for insect resistance has recently made rapid progress. It had been found that a wild mungbean accession TC1966 has strong resistance to the bruchid beetles ( Callosobruchus chinensis and C. maculatus) which is controlled by a single dominant gene producing insecticidal substance(s). We reared up mice with a diet containing 65% of mungbean seeds of the B14F4 line which is isogenic to a susceptible mungbean cultivar "Osaka Ryokutou" except for the bruchid resistance gene derived from TC1966 for a period of 4 weeks. The seeds of "Osaka Ryokutou" (OR) was used as control and commercial standard diet was used as reference. Aliquot portions of B14F4 and OR were heated to inactivate the antitrypsin activity in the seeds. There were no significant differences in the feed consumption and the body weight gain between the mice fed B14F4 and those fed OR or the standard diet. No difference was observed in the growth of mice between the groups fed B14F4 with and without heat inactivation. Changes in the weight of lungs, heart, kidneys, spleen and liver were not conspicuous between the mice fed B14F4 and those fed OR or the standard diet. No macroscopic and histopathologic changes were detected in almost all the organs examined. The counts of red blood cells, white blood cells, hemoglobin concentration, hematocrit value, alkaline phosphatase activity and glucose concentration were not different between the mice fed B14F4 and the mice fed the OR diet. However, the glutamic-oxaloacetic transaminase activity was higher and the total cholesterol concentration was lower in female mice fed B14F4 compared to other female mice. Thus the B14F4 mungbean diet did not cause any retardation of growth or pathological changes in mice within the 4-week period of feeding. However, based on the changes of the blood biochemical values listed above, another feeding test during a long-term period should be carried out to confirm the safety of bruchid resistant mungbean seeds derived from TC1966.