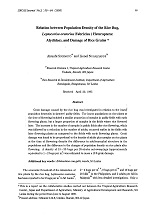 Grain damage caused by the rice bug was investigated in relation to the insect population denensity in farmers' paddy fields. The insect populations on rice plants at the time of flowering included a smallar proportion of nymphs in paddy fields with early flowering plants, but a larger proportion of nymphs in the fields where rice flowered later. The increase in the number of nymphs in paddy fields after rice flowering, which was followed by a reduction in the number of adults, occurred earlier in the fields with later flowering plants as compared to the fields with early flowering plants. Grain damage was found to be proportional to the density of adults plus nymphs on rice plants at the time of flowering despite the difference in adult-nymphal structure in the populations and the difference in the changes of population density on rice plants after flowering. A density of 15～30 bugs per 20-stroke net-sweepings (approximately equivalent to 1～2 bugs per m2) was estimated to cause a 10% grain damage.