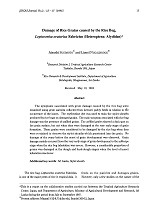 The symptoms associated with grain damage caused by the rice bug were examined using grain samples collected from farmers' paddy fields in relation to the occurrence of the insect. The erythrosine dye was used to stain the stylet sheaths produced by rice bugs on damaged grains. The main symptom associated with rice bug damage was the presence of unfilled grains. The unfilled grains showed a dark spot on the grain surface, but not when they were damaged at the very early stage of grain formation. These grains were considered to be damaged by the rice bug when they were re-stained to observe the stylet sheaths which penetrated into the grain. No damage of the ovary before the onset of grain development was observed. Grain damage mainly occurred from the very early stage of grain development to the milk-ripe stage when the rice bug infestation was severe. However, a considerable proportion of grains was damaged at the dough and hard-dough stages when the level of insect infestation was lower.