Screening of Bacteria Producing Vitamin B12 from Tua-Nao in Thailand 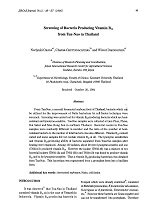 From Tua-Nao, a non-salt fermented soybean food of Thailand, bacteria which can be utilized for the improvement of Natto bacterium by cell fusion technique were screened. Screening was carried out for vitamin B12-producing bacteria which are heat-resistant and lysozyme-sensitive. Tua-Nao samples were collected at Lam Phun, Phrao, Doi Saket and Mae Hong Son in northern Thailand. Bacterial counts in Tua-Nao samples were markedly different in number and the ratio of the number of heat-resistant bacteria to the number of total bacteria was also different. Vitamin B12 content varied and some samples did not contain vitamin B12 at all. The lysozyme sensitivities and vitamin B12-producing ability of bacteria separated from Tua-Nao samples after heating were examined. Among 120 isolates, about 20 were lysozyme-sensitive and one (TN02-13) produced vitamin B12. However the isolate (TN02-13) was a mixture of two bacterial isolates (TN02-13a and TN02-13b) and TN02-13b was found to produce vitamin B12 and to be lysozyme-sensitive. Thus a vitamin B12-producing bacterium was obtained from Tua-Nao. This bacterium was regenerated from a protoplast form into a bacillary form.