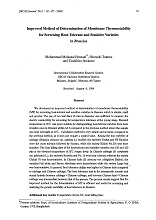 We developed an improved method of determination of membrane thermostability (MT) for screening heat-tolerant and sensitive varieties in Brassica which is simple, rapid and precise. The use of two leaf discs 13 mm in diameter was sufficient to measure the electric conductivity for screening for temperature tolerance at the young stage. Elevated temperature at 55℃ was more suitable for distinguishing heat-tolerant varieties from heat-sensitive ones in Brassica within 3-4 h compared to the previous method where the sample was kept overnight at 10℃. Calculation method is very simple and accurate compared to the previous method, as it does not require a control value. Among the four varieties of cabbage (Brassica oleracea var. capitata L.) studied, the varieties Yoshin and YR Kinshun were the most tolerant followed by Sousyu, while the variety Kinkei No.201 was heat-sensitive. The heat killing time of the heat-tolerant and sensitive varieties was 150 and 120 min at the elevated temperature of 55℃ respectively. In Chinese cabbage (B. campestris var. pekinensis L.), the varieties Kenshin and No.11 were heat-tolerant, whereas the variety Chihiri 70 was heat-sensitive. In Chinese kale (B. oleracea var. alboglabra Bailey), the varieties Full white and Sen-yo shirobana were heat-tolerant while the variety Large leaf was heat-sensitive. In general, heat tolerance ability was higher in Chinese kale compared to cabbage and Chinese cabbage. The heat tolerance trait in the interspecific somatic and sexual hybrids between cabbage×Chinese cabbage, and between Chinese kale×Chinese cabbage was intermediate between that of the parents. The present results suggest that the improved method for the determination of MT is efficient and useful for screening and analyzing the genetic variability of heat tolerance in Brassica.