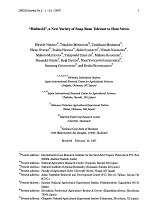 Snap bean is a heat-sensitive crop. In order to develop heat tolerant snap bean varieties, snap bean germplasm accessions were introduced from tropical countries. A total of 323 breeding lines provided by CIAT (Centro Internacional de Agricultura Tropical, Colombia), 20 varieties introduced from the Philippines, Sri Lanka and Indonesia, 6 varieties reported to be heat tolerant and provided by USDA (United States Department of Agriculture) etc. and 37 accessions collected in Malaysia and Thailand were evaluated for heat tolerance by open culture in summer at JIRCAS Okinawa Subtropical Station located in Ishigaki island, one of the sub-tropical islands of Japan. Some plants in one of the accessions from Malaysia were the most heat tolerant among the accessions tested. Therefore, one plant from this accession was chosen for further pure line selection. The line thus obtained showed a higher heat tolerance and higher yield potential than commercial varieties in local adaptability tests carried out in summer in several areas of southern Japan. Critical temperature for pod setting of the line was examined in a phytotron. The line showed a high tolerance not only to heat treatment for several days but also to heat treatment over a longer period of time like one month. When the line was exposed to high temperature for one month, the critical daily mean air temperature for pod setting ranged from 28℃ to 29.5℃. Judging from the meteorological data of the cities in southern Japan, heat tolerance of the line is high enough for summer culture in southern Japan. The line was registered as a new snap bean variety and designated as Haibushi by the Ministry of Agriculture, Forestry and Fisheries, Japan in 1995.