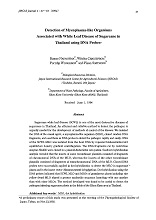 Sugarcane white leaf disease (SCWL) is one of the most destructive diseases of sugarcane in Thailand. An efficient and reliable method to detect the pathogen is urgently needed for the development of methods of control of the disease. We isolated the DNA of the causal agent, a mycoplasma-like organism (MLO), cloned random DNA fragments, and used them as DNA probes to detect the pathogen rapidly and easily. DNA of the SCWL MLO was isolated from the host DNA by repeated bisbenzimide-CsCI equilibrium density gradient centrifugation. The DNA fragments cut by restriction enzyme HindIII were cloned in a plasmid-Escherichia coli system. Southern hybridization analysis revealed that the inserts of some recombinant plasmids consisted of fragments of chromosomal DNA of the MLO, whereas the inserts of the other recombinant plasmids consisted of fragments of extrachromosomal DNA of the MLO. Cloned DNA probes were successfully applied in dot hybridization to detect the MLO in sugarcane plants and in the insect vector Matsumuratettix hiroglyphicus. Dot hybridization using the DNA probes indicated that SCWL MLO and MLOs of gramineous plants including rice yellow dwarf MLO shared a greater nucleotide sequence homology with one another than with other MLOs. The method developed was found to be useful to detect the pathogen infecting sugarcane plants in the fields of the Khon Kaen area in Thailand.