JIRCAS has released a "Technical Manual for Efficient Use of Water Resources in Irrigation Schemes", which describes several methods that contribute to improving water use efficiency in Africa, particularly in response to water resource constraints and facility degradation that are expected to become more serious in the future.

In Africa, the demand for rice continues to increase due to population growth and the spread of rice consumption. At the Fourth Tokyo International Conference on African Development (TICAD 4) in 2008, Japan launched the Coalition for the African Rice Development (CARD) with the goal of doubling rice production in sub-Saharan Africa from 14 million tons to 28 million tons by 2018, which was achieved. However, in light of the situation where demand for rice far exceeds supply, CARD2 was launched at TICAD 7 in 2019 with the goal of further doubling rice production by 2030 (with a rice production target of 56 million tons). JIRCAS is cooperating in the management of CARD together with 10 international organizations and institutes related to Africa.

So far, in response to the growing demand for rice in Africa, development of rice paddies and irrigation facilities, and dissemination and improvement of paddy rice cultivation technology have been promoted mainly by aid agencies, and some areas have achieved relatively high yields. On the other hand, there are many areas where irrigation has been established but the initial expectations have not been met because of problems such as unstable river flows, declining water availability due to deterioration of irrigation facilities, and uneven distribution of water between upstream and downstream areas, with excessive water withdrawal upstream of irrigation areas and water shortages downstream.

Analyzing these factors and considering countermeasures will contribute to improvement of water resources for agriculture, as well as to effective assistance, efficient use of water resources, and ultimately a stable supply of food in Africa. Factors that prevent the planned area from being irrigated can be divided into those that affect water sources, water intake facilities, canals and plots that depend on the route of water conveyance.

With support from the Japanese Ministry of Agriculture, Forestry, and Fisheries, JIRCAS analyzed the above factors and studied countermeasures in the Lower Moshi Irrigation Scheme of Tanzania (FY 2017-2021), and compiled some of the countermeasures into a manual. The analysis and study were conducted in collaboration with the Tanzanian Ministry of Agriculture (MoA), National Irrigation Commission (NIRC), Arusha Technical Collage (ATC), Tanzania Agricultural Research Institute, Selian Center, and Kilimanjaro Agricultural Training Center (KATC).

The manual is divided into the following categories according to content/user.

In addition, Tanzania has the following manuals prepared with Japanese technical cooperation.

This manual is complementary to the above manuals as it describes several methods that contribute to improving water use efficiency in response to water resource constraints and facility degradation, which are expected to become more serious in the future. 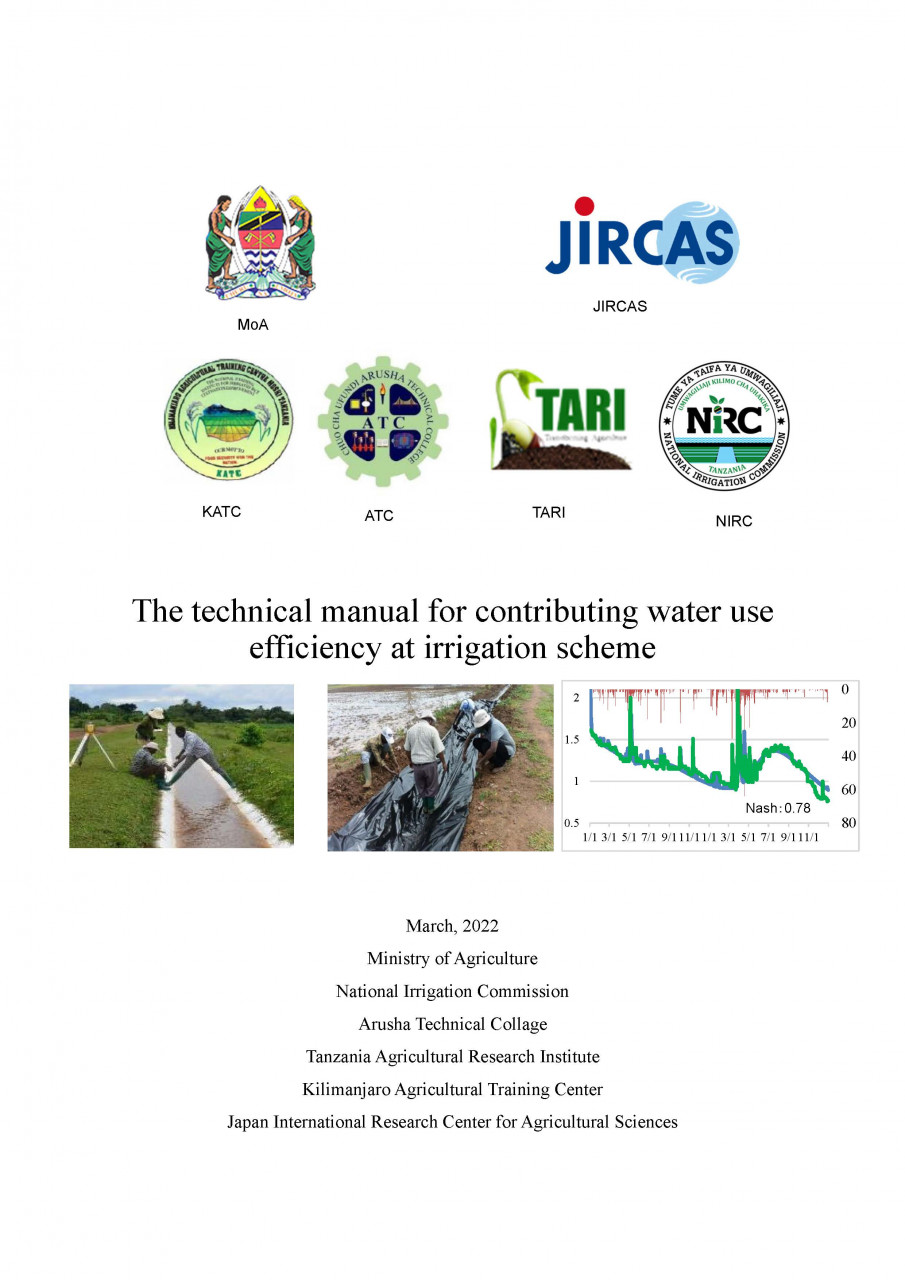 Technical Manual for Efficient Use of Water Resources in Irrigation Schemes