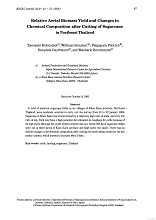 A total of nineteen sugarcane fields in six villages of Khon Kaen province, Northeast Thailand, were randomly selected to carry out the survey from 10 to 27 January 1995. Sugarcane in Khon Kaen was characterized by a relatively high ratio of stalk, and very low ratio of top. Stalk may have a high potential for utilization as roughage for cattle because of its high yield, although the crude protein content was low. About 200 kg of sugarcane stalks were cut in three farms of Khon Kaen province and kept under the shade. There was no definite change in the chemical composition after cutting and stock-piling except for the dry matter content, which started to increase after 3 days.