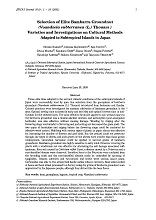 Three elite lines adapted to the soil and climatic conditions of the subtropical islands of Japan were successfully bred by pure line selection from the germplasm of bambarra groundnut (Voandzeia subterranean (L.) Thouars) introduced from Indonesia and Zambia. Cultural practices were investigated for summer cultivation of bambarra groundnut in the area. Optimal sowing time occurred in early and late May and optimal harvest time in mid-October for the selected lines. The most effective herbicide applied to soil without injury to the bambarra groundnut was a linuron-alachlor mixture, and sethoxydim (post-emergence herbicide) was also effective without causing damage. Weeding by ridging after the flowering stage was harmful to flowering and pod setting and decreased the grain yield. The two types of herbicides and ridging before the flowering stage could be combined for effective weed control. Mulching with various types of plastic or paper sheets was effective for increasing the number of flowers and pod yield. But the pedicel could not penetrate through any types of sheets, and pods grown on the sheets were smaller than those grown underground. Groundnut harvester could be applied to harvest grains of bambarra groundnuts. Bambarra groundnut was highly sensitive to salty wind. However covering the plants with a wind-break net was effective for alleviating the salt damage associated with typhoons. Root wilt caused by Corticium rolfsii Curzi, a disease caused by a Potyvirus and a non-identified disease were observed. Sensitive lines to the Potyvirus were excluded from the breeding trials and the non-identified disease could be controlled by spraying of fungicides. Tobacco cutworm and two-striped leaf beetle were serious insect pests. Carbosulfan was able to two-striped leaf beetle unlike tobacco cutworm. Bean salad cooked at home and bean sweet processed in a factory using dry grains of bambarra groundnut were appreciated by the Japanese people, although they did not like the bean flavor.