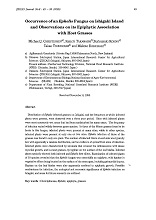 Distribution of Ephelis-infected grasses on Ishigaki, and the frequency at which infected plants were present, were observed over a three year period. Sites with infected plants were most commonly wet areas that had been undisturbed for many years. The frequency of infection varied widely between grass species. In three of the fifteen grasses found to be hosts to this fungus, infected plants were present at many sites, while in other species, infected plants were present at only one or two sites. Ephelis infection of three of the grasses was found in only one plant. The number of infected tillers at each site was typically low with apparently a random distribution, and no evidence of spread from sites of infection. Infected plants were characterized by stromata that covered the inflorescence with dense mycelial growth, and in most grasses, by hyphae on the surface of the leaf blades. Infected plants typically showed both infected and Ephelis-free tillers. Examination of infected plants of 10 species revealed that the Ephelis fungus was essentially an epiphyte, with hyphae in vegetative tillers being located on the surface of the stem apex, including primordial leaves. Hyphae on the leaf blades were also apparently confined to epiphytic growth. Possible mechanisms for infection, the ecological and economic significance of Ephelis infection on Ishigaki, and areas for future research are outlined.