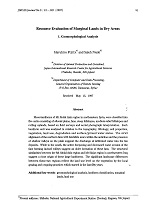 Meso-landforms of Mt Abdal Aziz region in northeastem Syria, were classified into five units consisting of alluvial plains, fans, steep hillslopes, medium-relief hillslopes and rolling uplands, based on field surveys and aerial photograph interpretation. Each landform unit was analyzed in relation to the topography, lithology, soil properties, vegetation, land use, degradation and surface/ ground water status. The strict alignment of the northern fans with landslide scars within the anticline and the presence of shallow valleys on the plain suggest the discharge of infiltrated water into the fan deposits. While in the south, the active deepening and downward water erosion of the fans forming incised valleys suggest an older formation of these fans. The structural similarities between the Mt Abdal Aziz region and Mt Sinjar region in northwestern Iraq suggest a close origin of these large landforms. The significant landscape differences between these two regions reflect the land use level on the vegetation by the local grazing and cropping practices which started in the last fifty years.