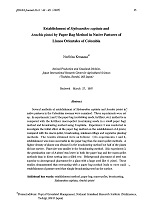 Several methods of establishment of Stylosanthes capitata and Arachis pintoi in native pastures in the Colombian savanna were examined. Three experiments were set up. In experiments 1 and 2 the paper bag (containing seeds, fertilizer, etc.) method is as compared with the fertilizer macro-pellet (containing seeds in a small paper bag) method and broadcasting method using S.capitata. Experiment 3 was conducted to investigate the initial effect of the paper bag method on the establishment of A.pintoi, compared with the macro-pellet, broadcasting, minimum tillage and vegetative planting methods. The results obtained were as follows: 1) In experiments 1 and 2, establishment was more successful in the paper bag than the macro-pellet methods. A higher density of plants was obtained in the broadcasting method but half of the plants did not survive. Plant size was smaller in the broadcasting method. 2) In experiment 3, the germination rate of A.pintoi was lower in both the paper bag and the macro-pellet methods than in direct sowing into a tilled row. Belowground placement of seed was superior to aboveground placement for a plant with a large seed like A. pintoi. These studies demonstrated that oversowing with a paper bag method leads to more rapid establishment of pasture seed than simply broadcasting seed on the surface.