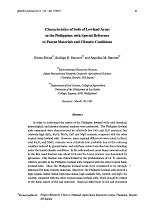 In order to understand the nature of the Philippine lowland soils, total chemical, mineralogical, and physico-chemical analyses were performed. The Philippine lowland soils examined were characterized by relatively low SiO2 and K2O contents, but relatively high Al2O3, Fe2O3, MnO2, CaO and MgO contents, compared with the other tropical Asian lowland soils. However, some regional differences were noted: in Bicol, total Fe2O3 and MnO2 contents were relatively low, probably due to the reducing condition induced by ground water, and total base content was also low, due to leaching under the humid climatic conditions. In the soils analyzed, mean heavy mineral content in the fine sand fraction was about 10 % and the heavy fraction was dominated by pyroxenes. Clay fraction was characterized by the predominance of 14 Å minerals, which is peculiar to the Philippine lowland soils compared with the other tropical Asian lowland soils. Thus, the Philippine lowland areas were considered to be strongly influenced by basic volcanic materials. Moreover, the Philippine lowland soils showed a high organic matter status, high base status, high available SiO2 content, and high clay content, compared with the other tropical Asian lowland soils, which should be related to the basic nature of the soil materials. Regional differences in the soil characters associated with the organic matter status were observed, reflecting differences in the climatic conditions: organic C and total N contents were highest in Bicol, while lowest in Central Luzon; the pH (H2O) was lowest in Bicol, with the highest value being recorded in Central Luzon. The saturated permeability was observed to be very low in most of the soils examined, owing to their clayey nature. The bulk density generally varied with the amount of organic matter: it was lowest in the surface samples within the profile and was relatively low in the Bicol soil samples among the regions with a relatively high organic matter content.