The Yellow Butterfly Species of the Genus Eurema Hübner Causing Severe Defoliation in the Forestry Plantations of Albizzia, Paraserianthes falcataria (L.) Nielsen, in the Western Part of Indonesia 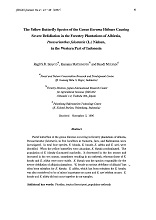 Pierid butterflies of the genus Eurema occurring in forestry plantations of albizzia, Paraserianthes falcataria, in five localities in Sumatra, Java, and Kalimantan were investigated. In total four species, E. blanda, E. hecabe, E. alitha and E. sari, were identified. When the yellow butterflies were abundant, E. blanda predominated. The population of E. blanda fluctuated markedly. It decreased in the dry season and increased in the wet season, sometimes resulting in an outbreak, whereas those of E.hecabe and E. alitha were more stable. E. blanda was the species responsible for the severe defoliation of albizzia plantations. "E. hecabe as serious defoliator of albizzia" has often been mistaken for E. blanda. E. alitha, which has been mistaken for E. hecabe, was also considered to be of minor importance as a pest and E. sari seldom occurs. E.hecabe and E. alitha did not occur together in our samples.