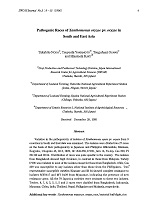 Variation in the pathogenicity of isolates of Xanthomonas oyzae pv. oryzae from 9 countries in South and East Asia was examined. The isolates were divided into 27 races on the basis of their pathogenicity to Japanese and Philippine differentials, Kinmaze, Kogyoku, Chugoku 45, IR 8, IR20, IR 1545-339, DV85, Java 14, Te-tep, Cas 209, PI 231129 and IR 24. Distribution of races was quite specific to the country. The isolates from Bangladesh showed high virulence, in contrast to those from Malaysia. Variety DV85 was resistant to most of the isolates except for those from Bangladesh, while, Cas 209 was susceptible to any isolates other than those from the Philippines. Two representative susceptible varieties Kinmaze and IR 24 showed complete resistance to isolates MY8417 and MY 8429 from Myanmar, indicating the presence of new resistance gene. All the 79 Japonica varieties were resistant to these two isolates. Twelve, 8, 7, 6, 5, 5, 5, 5 and 2 races were clarified from Bangladesh, Indonesia, Myanmar, China, India, Thailand, Nepal, Philippines and Malaysia, respectively.