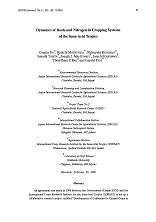 An agreement was made in 1984 between the Government of Japan (GOJ) and the International Crops Research Institute for the Semi-Arid Tropics (ICRISAT) to set up a collaborative research project entitled "Development of Cultivation for Upland Crops in the Semi-Arid Tropics". Within this framework, scientists in the first phase of the project (1984-1989) concentrated their studies on phosphorus (P) nutrition of grain legumes in the semi arid tropics (SAT). During the second phase of the project (1989-1994) the scientists focused on the dynamics of roots and nitrogen (N) in cropping systems, particularly in pigeonpea-based intercropping systems. Pigeonpea-based intercropping is widely adopted by resource-poor farmers in the SAT. Highlights of the five year activities are summarized below.
Using an exponential fitting of profile distribution of root length, it was found that the roots of pigeonpea spread less to the horizontal direction and more to the vertical direction than those of sorghum, pearl millet, groundnut and cowpea. A model based on weather and soil data predicted that the progression of the rooting front of pigeonpea was more rapid for the same physiological age. A kinetic study on N uptake showed that pigeonpea could utilise soil and fertilizer N as efficiently as other crops which lack an ability of biological nitrogen fixation (BNF), suggesting that there would be a considerable competition for N with other companion crops, such as cereals in intercropping. To reduce the competition for external N it is important to increase the dependency of pigeonpea on BNF. Measurement of root respiration showed that pigeonpea would invest a considerably higher respiratory energy for N uptake.
Nitrate (NO3-N) concentration in the soil solution extracted by using ceramic porous cups was found to be highest at the beginning of the cropping season and it decreased rapidly thereafter. The NO3-N concentration in the soil solution decreased and a zero value was recorded two months after sowing. It was estimated that an amount of between 100-150 kg ha-1 of mineralized N was detected in the soil solution within a 50 cm soil depth, prior to sowing. This suggests that an appreciable amount of N would be available for crop uptake in nutrient-limited Alfisol during the initial growth stage.
The 15N labelling and 15N natural abundance studies showed that the N balance sheet among different N sources for the crops, i.e., soil N, fertilizer N and atmospheric N, would be altered by intercropping, toward a larger proportion of N derived from biological nitrogen fixation. The application of urea to the sorghum row was superior to broadcasting and split applications, and delayed application one month after sowing was superior to basal application (before sowing) in terms of nitrogen use efficiency (NUE) of a component sorghum crop, although biomass yield was not affected. The delayed application is advantageous because if crop establishment fails due to insufficient rainfall, no fertilizer cost is incurred.
To improve resource utilization in intercropping, it was recommended that pigeonpea be intercropped with a crop which has a shallower root system and a higher N uptake efficiency such as sorghum. In addition, delayed N-fertilization to the cereal crop before N disappears from the soil solution, which normally occurs about one month after sowing, is recommended.