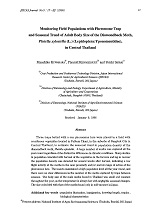 Three traps baited with a sex pheromone lure were placed in a field with cruciferous vegetables located in Pathum Thani, in the suburbs of Bangkok City in Central Thailand, to estimate the seasonal trend in population density of the diamondback moth, Plutella xylostella. A large number of moths was captured all the year round regardless of the distinctive differences in climatic conditions. Sharp decline in population coincided with harvest of the vegetables in the furrows and lag to recover the population density was detected for several weeks after harvest, indicating a low flight activity of the moths in the near proximity and/ or narrow range of action of the pheromone lure. The insects maintained a high population level all the year round, and there were no clear differences in the number of the moths captured by traps between seasons. The body size of the male moths found in Thailand was small and constant throughout the year, as the temperature is always hot with negligible seasonal changes. The size coincided with that of the moths found only in mid-summer in Japan.