Climatic Differences between an Oasis and its Peripheral Area in Turpan Basin, Xinjiang, China 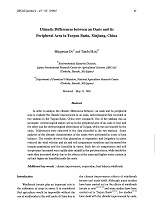 In order to analyse the climatic differences between an oasis and its peripheral area to evaluate the climatic improvement in an oasis, meteorological data recorded at two stations in the Turpan Basin, China were compared. One of the stations was an automatic meteorological station set up in the peripheral area of an oasis (1 km) and the other was the meteorological observatory of Turpan, which was surrounded by the oasis. Differences were observed in the data recorded in the two stations. Some analyses of the climatic characteristics of the oases were performed in terms of heat balance. The results showed that plantation of vegetation and irrigation in oases reduced the wind velocity and air and soil temperature variations and increased the evapotranspiration and the humidity in oases. Both the air temperature and soil temperature increased very rapidly after rainfall in the peripheral area, while inside the oasis they increased slowly due to the effects of the oasis and higher water content in soil and higher air humidity inside the oasis.