Maltose Generation by Beta-amylase and its Relation to Eating Quality of Steamed Storage Roots of Sweet Potato Cultivars, Including Recently Developed Varieties in Japan 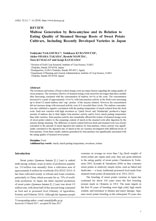 The sweetness and texture of heat-cooked storage roots are major factors regarding the eating quality of sweet potatoes. The sweetness (Brix%) of steamed storage roots stored for not longer than three months after harvesting correlated with the concentration of maltose (wt.%) in the roots. The concentration increased to a peak of approximately 10 wt.%, with beta-amylase activity in the fresh roots increasing up to about 0.2 mmol maltose min-1 mg-1 protein of the enzyme solution. However, the concentration did not increase along with increased activity even if it exceeded these levels. The maltose concentration also exhibited a negative correlation with the pasting temperature of starch isolated from the fresh roots. Such new varieties with high sweetness as ‘Quick Sweet’ and ‘Beniharuka’ produced a larger amount of maltose due to their higher beta-amylase activity and/or lower starch pasting temperature than older varieties. Beta-amylase activity also remarkably affected the texture of steamed storage roots of sweet potato relative to the remaining content of starch in the steamed roots after digestion by the enzyme during steaming. The difference in starch content between fresh and steamed roots was closely correlated to the amount of starch digested into maltose by beta-amylase, whose activity was significantly correlated to the digestion rate of starch in the six varieties investigated with different levels of beta-amylase. From these results, maltose generation by beta-amylase was significantly associated with the eating quality of steamed sweet potato.