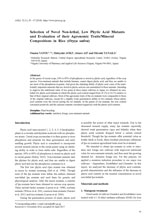 In the grains of cereal crops, 65% to 85% of phosphorus is stored as phytic acid, regardless of the crop species. Non-ruminant animals that include humans, cannot digest phytic acid, and they are unable to use most of the phosphorus in grains. And given the chelating ability of phytic acid, some of the nutritionally important minerals that are stored in phytic acid are not assimilated in these animals. Intending to improve the nutritional value of rice grain in three major cultivars in Japan, we obtained six nonlethal low phytic acid mutants in which the phytic acid content ranged from 42.1% to 94.1% relative to that of their original cultivars. Most of the agronomic traits of the six mutants were comparable to those of the original cultivars, except for a slightly weak germination ability in two mutants whose phytic acid contents were the lowest among the six mutants. In the grains of our mutants, the iron content correlated positively and the calcium contents correlated negatively with the phytic acid contents.