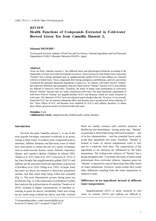 Green tea from Camellia sinensis L. has different tastes and physiological functions according to the temperature of water used when brewing the tea leaves. Green tea brewed with boiled water (especially “Sencha”) has a strong astringent taste as epigallocatechin gallate (EGCG) and caffeine are extracted with hot or boiled water. These compounds elicit strong astringency and bitterness, and were previously considered the principal functional ingredients in green tea. In contrast, cold-water brewed “Sencha” has much less bitterness and astringency than hot-water brewed “Sencha” because EGCG and caffeine are difficult to extract in cold water. Therefore, the tastes of amino acids predominate in cold-water brewed “Sencha” because they are easily extracted in cold water. The main functional components of cold-water brewed “Sencha” are epigallocatechin (EGC) and theanine, which are easily extracted in cold water. The functions of EGC have not attracted much attention thus far. However, it was recently found that EGC has an immune-enhancing effect and theanine has a psychosocial stress-reducing effect. These effects of EGC and theanine were inhibited by EGCG and caffeine; therefore, to obtain these effects, green tea needs to be brewed with cold water.