Dr. Masa Iwanaga, President of JIRCAS, opened the symposium. He stated the background and objectives, briefly discussed the symposium’s theme, and gave remarks on the future direction of resilient food production systems.

Mr. Masamichi Saigo, Research Councilor of the AFFRC Secretariat, MAFF, welcomed the participants. He named population growth and crop failure due to global warming as contributors to food insecurity and emphasized the significance of exchanging information on the topic of resilience.

In Session 1, "Resilience in the Livestock Sector," resilience to livestock damage due to cold and snow disasters (Dzud) in northeast Asia and droughts in the Horn of Africa were discussed. Measures to protect pastoralists from livestock losses were also presented.

In Session 2, "Resilience in Upland Crop Production," speakers and participants reported on and discussed conservation agriculture in Africa and China. The extent and countermeasures to drought and salt damage in Uzbekistan were also explained.

In Session 3, "Resilience in Paddy Rice Production," the following topics were discussed: “The impact of cyclone ‘Aila’ on the livelihood of the coastal people of Bangladesh,” “Weather Index Insurance for Agriculture (WIIA) in Thailand,” and “Adaptation and coexistence in high-flood rice area in the Mekong Delta.”

In Session 4, "Risk Recognition and Monitoring System,” the presentations focused on the Mauritanian experience on desert locust pest control, migration prediction and insecticide resistance monitoring for rice planthoppers, and the development of an early-warning system against cool-weather damage in rice production.

During panel discussion, titled “Role of Technological Development and Japan’s Contribution,” the four panelists expressed their ideas and gave comments from the standpoint of soil, weather, farm management, and biodiversity.

The discussion was concluded by acknowledging the need of dynamic diversity which considers profitability, and that the symposium would have served its purpose if it contributes to further deepen agricultural research on issues related to resilience. 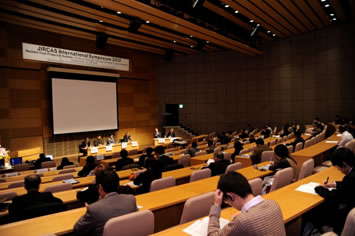 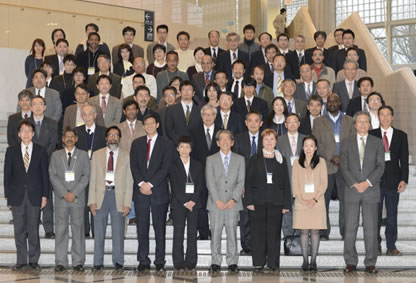