Advances in Rice Breeding for Africa 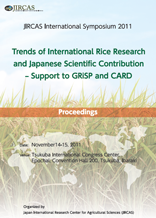 AfricaRice is well known for its NERICA varieties, which has become a household name in Africa. About
700,000 ha of rice land is currently grown under NERICA varieties in both upland and lowland conditions
(NERICA-L varieties). AfricaRice and partners from national and international research organizations are
continuously striving to develop new materials that will be worthy successors of these NERICA varieties and
other improved varieties developed by AfricaRice and partners over the last decades, such as the WAB and
Sahel series.
The NERICAs were developed from a very narrow genetic resource base. The genetic resources unit in
AfricaRice carries more than 20,000 collections of Oryza accessions, including African domestic accessions
of O. sativa, O. glaberrima and O. barthii. Characterization of core collections of these accessions is ongoing
for different key traits (drought, salinity, tolerance to P-deficiency, flood tolerance, disease resistance) with a
number of advanced research institutions across the globe.
Recent evaluation of landraces of O. sativa as well as O. glaberrima revealed several important traits. For
rice yellow mottle virus (RYMV), one of the most devastating diseases in Africa, several accessions of
O.glaberrima showed resistance to strains of the virus, and markers associated for each type of resistance have
been identified. Salt tolerance is one of the essential traits for rice growing in coastal and even inland areas in
many African countries. Landraces collected in salt-affected fields, O. glaberrima and lowland NERICA
varieties were evaluated for salt tolerance under both field and controlled conditions, resulting in the
identification of a number of tolerant entries, among which 8 landraces, 4 O. glaberrima and 4 lowland
NERICAs. Preliminary molecular characterization indicates that for the majority of these materials tolerance
is governed by a locus different from saltol, which has been widely used in marker-assisted selection .
AfricaRice uses MAS in a number of breeding programs where appropriate markers have been validated
and are routinely available. In the breeding of RYMV resistant varieties, markers associated with rymv 1-2,
which has been identified in collaboration with IRD, France were used. Resistant BC3F5 lines are under
evaluation for agronomic traits at multiple locations in Africa. Moreover, to make the resistance more durable
in Africa, markers for rymv2 are being introduced to breeding lines carrying rymv1-2. For rice blast, the most
destructive fungal disease in Africa, field resistant genes, Pb1 and pi21, both of which were kindly provided
by NIAS, Japan, are being introduced for mega-varieties in upland and irrigated environments. Furthermore, a
locus resistant to salt, saltol, and a resistant gene to submergence, sub1, are under introgression into lowland
varieties in Africa. MAS will also be used for introducing cold and Fe toxicity tolerance, upon identification
of appropriate markers.
Breeding programs at AfricaRice, IRRI, CIAT and NARS continuously produce promising breeding lines.
In 2010, the Africa Rice Breeding Task Force was launched to facilitate a more systematic evaluation of many
promising breeding lines from various institutions, under multiple environmental conditions, and with the
same protocol for evaluation. The Task Force involves breeders from 28 African countries and covers four
mega-environments: the rainfed lowland, rainfed upland, irrigated and high elevation environments and
consists of three phases of evaluation trials; regional, national and multi-locational trials including
participatory varietal selection (PVS). Task Force activities are facilitated by breeders from AfricaRice and
IRRI based in Africa, which have been assigned responsibilities for the various mega-environments. During
the 2011 wet season, about 500 lines were under evaluation at more than 20 sites across Africa. The breeding lines selected at the last phase of this evaluation process will be recommended to target countries or regions.
AfricaRice processes all data centrally using IRIS, allowing for a systematic G x E approach to varietal
evaluation across Africa.
AfricaRice estabished a hybrid-rice program in late 2009 at its research station in Senegal through the
recruitment of an experienced Egyptian hybrid rice breeder, who works in close collaboration with breeders
from IRRI and China. Restorer lines have been identified among African varieties and male sterility has been
introduced into a number of varieties.
The Global Rice Science Partnership (GRiSP) led globally by IRRI and in Africa by AfricaRice will
accelerate varietal development in Africa by mobilizing global expertise for well-defined pre-breeding and
breeding products of relevance to Africa’s growth environments and consumer preferences. GRiSP has also
launched a global phenotyping network with unified protocols for important traits (such as drought), which is
expected to be of great benefit to rice breeding activities in Africa.