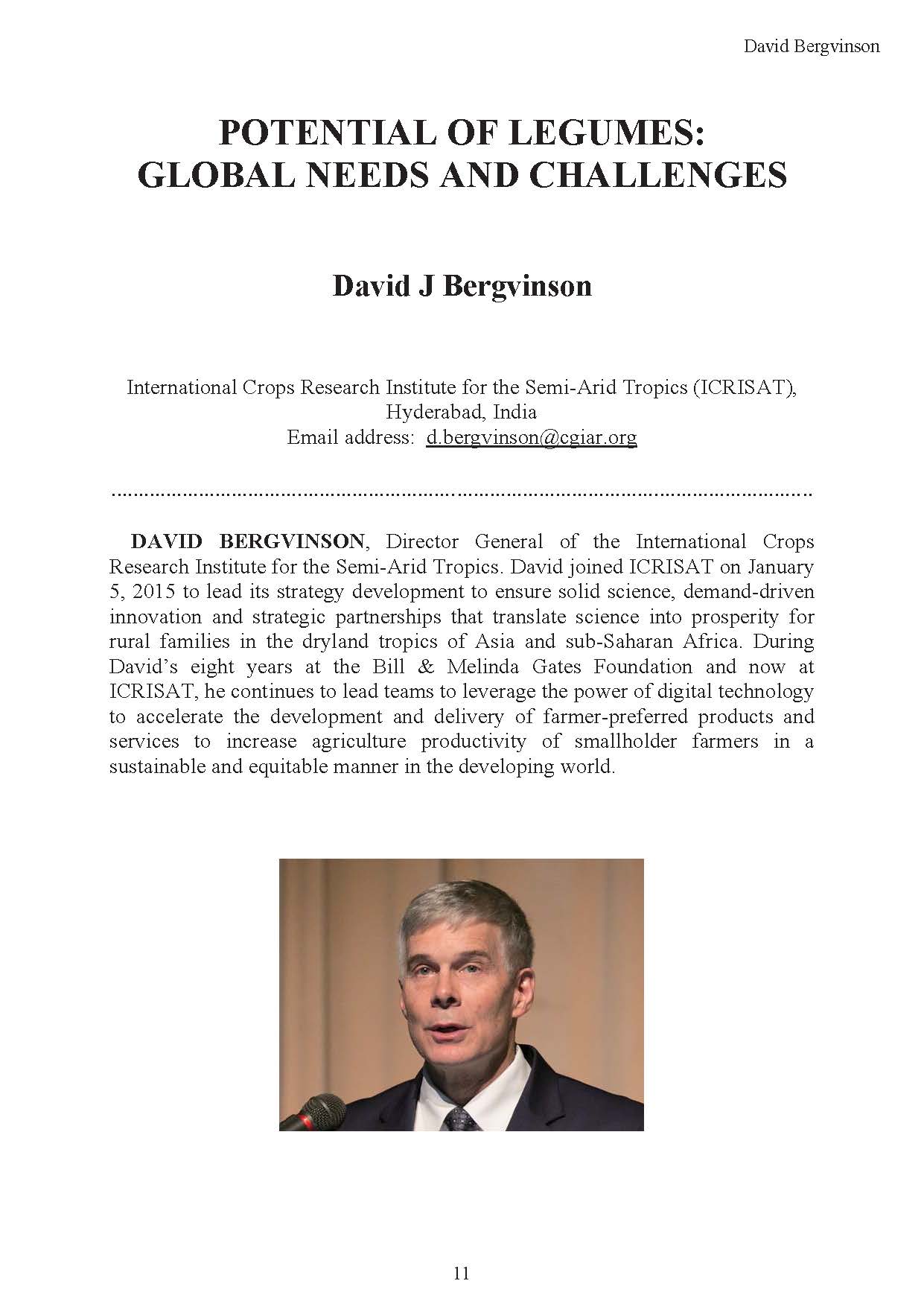 Hunger and malnutrition are preventing millions of children from realizing their full potential that will have long-term implications for society and economic development. Undernutrition contributes to the death of over 3 million children each year and for those who survive, robs them of reaching their full potential in life. Of the 795 million who suffer from undernutrition, 780 million live in developing countries (FAO, 2015). Therefore, it is essential to adopt an inclusive and demand-driven approach to accelerate the design, development and delivery of science-based solutions to address undernutrition. Pulses (or grain legumes) offer a rich source of protein and nutrients to combat undernutrition and contribute to a balanced diet (Foyer et al 2016), while also improving soil health and increasing the agro-biodiversity of our cropping systems around the world (Siddique et al. 2012). Enhancing public awareness on the contribution of pulses to modern food systems was the intent of the 68th UN General Assembly declaring 2016 as the International Year of Pulses (IYP).

Pulses make tremendous contributions to sustainable food production systems through their ability to fix symbiotic nitrogen from the atmosphere. This has important nutritional implications for humans, livestock and the soil. However, adoption of improved production technologies for pulse crops is not keeping pace with the major cereal crops (maize, wheat, and rice). The area planted to pulses has gradually increased over the past 50 years, but it is still only a quarter of that planted to maize, wheat and rice. While changes in agronomic practices and new varieties of pulses have occurred over the past two decades, increase in pulse production is not keeping pace with demand that is leading to price volatility, especially in developing countries. Pulses play a critical role in conservation agriculture (CA) by rotating them with cereals, enabling minimum tillage and improved soil health over time. Adoption of CA is slowly picking up in smallholder farming systems in Asia and Africa, with increasing availability of herbicides and development of implements suitable for minimum tillage and business models to make mechanization economically viable. Decision support systems are now being developed to support smallholder farmers in choosing cultivars, sowing date, and best agronomic practices that are fundamental to enhance pulse production and profitability for farmers.

Despite being important crops from different perspectives, the average productivity of pulse crops is very low as they are exposed to a number of biotic and abiotic stresses in sub-Saharan Africa and Asia. Therefore, with the objective of increasing production, reducing poverty, hunger, and malnutrition of smallholder farmers, while improving the health of humankind and the sustainability of farming systems in the next 10 years, ICRISAT is leading the CGIAR Research Program - Grain Legumes (CRP-GL) that is targeting research for development in eight major food legumes including chickpea, common bean, cowpea, faba bean, groundnut, lentil, pigeonpea, and soybean that are primarily grown by smallholder farmers in South and South East Asia, sub-Saharan Africa, Central and Western Asia, North Africa, Latin America and the Caribbean. The main aim of the CRP-GL is to combat poverty, hunger, malnutrition and environmental degradation by increasing productivity, profitability and consumption of grain legumes. During last four years, CRP-GL partners have leveraged their knowledge and research capacities by coordinating strategies with diverse public and private organizations. CRP-GL partners have released over 250 grain legumes varieties, 4 pigeonpea hybrids, and facilitated production of over 445,847 tons seeds of improved varieties of legumes. To create awareness among farmers, processors and policy makers, over 23,000 demonstration trials were conducted to support best management practices. In brief, 30,000 people (including 17,000 women) were trained in short-duration training courses.

With an objective to enhance genetic gains, the CRP-GL partners have also made significant advances in developing genomics tools, technologies and platforms for accelerating genetic gains and innovative seed systems to support the delivery of improved pulses to farmers. For instance, the genome sequences that are now available for legume crops include chickpea, pigeonpea, common bean, groundnut, and soybean, and efforts are underway in lentil and faba bean. Several thousands to millions of molecular markers are now available in legume crops (Varshney 2016). High-density genotyping platforms such as Affymetrix SNP arrays, Illumina arrays, genotyping-by-sequencing have been developed for cost-effective genotyping in several legume crops. By using these genotyping platforms and precision phenotyping, a wide range of marker-trait associations have been established for grain legumes to enhance precision and efficiency of breeding programs. Successful examples of molecular breeding include the development of superior lines with enhanced drought tolerance, Fusarium wilt and Ascochyta blight resistant lines in chickpea, leaf rust and late spot resistant lines in groundnut, improved oil quality lines in groundnut and utilization of markers for assessing purity of hybrids/parental lines in pigeonpea (Varshney 2016). Hybrid pigeonpea is now available and being adopted in India and Kenya by seed companies and farmers, and Bt-chickpea and Bt-pigeonpea are being test in trials at ICRISAT.

During the past year, pulses have enjoyed increased demand by producer and consumers in response to the awareness of the nutritional and environmental benefits pulses offer - thanks in part to the International Year of Pulses. This in turn is leading to economic benefits for smallholder farmers in the developing world who can respond to market signals and access domestic and international market opportunities. However, more is required to support farmers access appropriate knowledge, inputs and mechanization to reduce production costs and equitable markets to translate increased productivity into profitability.

In summary, grain legumes, provide an opportunity to ensure nutritional security in both the developed and developing world and through increased demand, enhance farmers' income and profitability. With recent advances in modern tools for breeding, agronomy and market integration, it is now possible to unlock the full potential of grain legumes to support the realization of the Sustainable Development Goals within 14 years. To realize this, public-private-producer partnerships will be required that draw on science-based, demand-driven innovations and enabling policies to ensure pulses play an increasingly important role in global nutritional security that will enable us to live within the planetary boundaries.