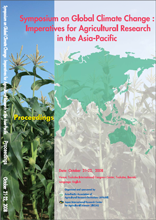 The target given to Japan for the first commitment period of the Kyoto Protocol is to reduce
average emissions of greenhouse gases (GHG) by six percent from the base year. For the successful
achievement of the target, Japanese government has revised the Kyoto Protocol Target Achievement
Plan in March 2008, in which options for mitigating GHG emissions from agriculture are included. On
the other hand, the impacts of climate change on agriculture can already be seen in some cropping
systems of Japan. Therefore, research outputs both for mitigation and adaptation of climate change in
agricultural sector are requested in Japan without delay. Currently, series of research projects are
carried out by cooperating research institutes and universities to meet the immediate necessities. One
of the research projects supported by the Ministry of Agriculture, Forestry and Fisheries, entitled
“Evaluation, adaptation and mitigation of global warming in agriculture, forestry and fisheries:
research and development”, comprehensively studies the effects of global warming on Japanese
agriculture, forestry and fisheries, and aim to develop technologies for mitigation and adaptation.
Carbon cycles in Japanese agricultural lands, as well as forest lands, are quantitatively estimated
by combining monitoring data and modeling. Soils can be either a sink or a source of atmospheric CO2
depending on the balance between C input to soils and C decomposition in soils. There are many
factors controlling soil C balance. We can control some factors but cannot control others. For example,
increasing C input to soils by application of manure can increase soil C. Reducing C decomposition by
introducing no-tillage system can also increase soil C. We have conducted long-term experiments with
continuous organic matter application under typical soil type and cropping system of each prefecture
(over 150 sites in total), which demonstrated that soil carbon stock increased through organic matter
application such as compost. Using such long-term data, we are developing the soil carbon model to
predict SOC dynamics in future through climate and/or management change.
Agriculture is identified to be a major source for methane (CH4) and nitrous oxide (N2O), which
contribute about 70% and 60%, respectively, in Japanese GHG inventory. Field experiments for
evaluating mitigation options for these gases are conducted in agricultural lands and animal industry
have been conducted at various sites in Japan. These experiments have demonstrated promising
options that can mitigate the emissions significantly (10% to >50%), compared with each
corresponding control treatment. Those options include composting rice straw, improving mid-season
drainage practices for CH4 from rice cultivation, fertilizer management for N2O from upland fields,
and diet management for animals. Some of the options, such as improved mid-season drainage in rice
cultivation, are now in the extension stage. In addition to the field experiments, process based or
statistical models are developed to estimate the emission rates of CH4 and N2O, together with their
mitigation potentials, in Japanese agriculture.
The projected increase of atmospheric CO2 concentration ([CO2]) and global warming will have
significant impacts on future agricultural productivity. While elevated atmospheric [CO2] will promote
growth and yield of rice, warmer climates may reduce the yield. The net change of the crop
productivity will depend on the extents of these counteracting effects of future climates, and the
magnitude and even the direction of the change will be subject to an uncertainty due to the lack of our
capability to predict the respective and interactive effects under field conditions. Attempts are
underway to fill the gap between chamber and open-field observations, using facilities such as free-air
CO2 enrichment (FACE) systems. The primary effect of elevated CO2 is enhanced photosynthetic rates,
but season-long CO2 enrichment (200 ppmv above the ambient) in the field showed a substantial
decrease in the photosynthetic enhancement as the growth stage progresses. This resulted in a relatively modest yield enhancement around 14% for rice, but also suggests that there is a possible
room for improvement in the CO2 fertilization effect. Extreme temperature events during the critical
period for reproductive development and/or anthesis have long been known to increase floret sterility
and thereby reduce grain yield substantially. Under elevated [CO2], stomatal conductance is reduced so
that leaf, canopy and panicle temperatures are increased; this can exacerbate the heat induced spikelet
sterility. Large genotypic variations in heat avoidance/tolerance traits will provide us with
opportunities to develop countermeasures against heat stresses in the future.
To grasp the actual influence of global warming on agricultural production in Japan, a
questionnaire was sent to prefectural institutes for agricultural research. All prefectures replied that
global warming had affected on at least one fruit tree species. Fruit qualities have clearly changed, for
example coloring faintly, enlarging, reduction of acid, softening and spoiling rapidly. Freezing injury
and late frost damage has increased in north Japan which is colder area. It is predicted that the
favorable regions to cultivate apples and satsuma mandarins will gradually move northward. Over
70% of prefectures recognized effects of warming on rice, vegetable, and flower cultivation.
Horticultural crops are likely to be more sensitive to global warming than other agricultural crops. Our
survey elucidated many effects of recent warming, such as changes in the length of crop-growing
periods, reductions in feed intake and feeding efficiency of livestock, and reductions in yields of wheat,
barley, vegetables, flowers, milk, and eggs.