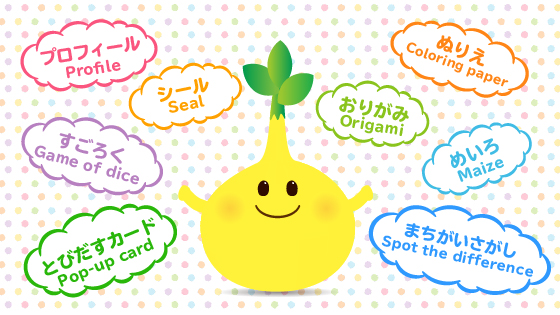 Back to the 16th TARF Open House (Online) | Please fill in the Open House survey form to facilitate better planning of outreach activities in the future. 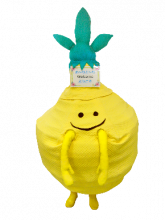 Birthday
August 4, 2008 (Japanese Coconut Day)
Gender
Non-binary, "a fairy of agriculture"
Height
Undisclosed
Weight
Undisclosed
Personality
Friendly, easy-going
Hobbies
Strolling, planting seeds
Favorite things
Sunshine
Weakness
Staying up late at night, sensitive to cold
Skills
Multilingual
Where to meet
TARF Exhibition Room,
TARF Open House (Usually last Sunday of June),
Harvest festival parade in Ohama, Ishigaki City
Origin
Nekken-kun is a coconut fruit that drifts on the sea and washes up in foreign countries where it germinates, grows, and bears fruits to help the people there.
Remarks
The origin of the name partially shares the concept of the JIRCAS mission, working “Together for our food and planetary health”. JIRCAS was formerly known as Tropical Agriculture Research Center (TARC) and used a palm tree as its logo (see below). In addition, the staff of the former TARC used to sing the song “Yashi no mi” (Coconut fruit, lyrics by Toson Shimazaki) at various occasions as if it was the official song. “Nekken”, the abbreviation of the former TARC has remained as the abbreviation of the Tropical Agriculture Research Front (TARF) which is now a research station of JIRCAS, and it is also used in the logo of TARF in Japanese (see below). The nickname “Nekken” is well known among local people of Ishigaki for over 50 years since its foundation. Knowing this history, a group of contractual staff of TARF voluntarily proposed and created “Nekken-kun” as a mascot character for promoting various public relations activities of TARF.

Have fun with Nekken-kun using the different playing papers that you like! Print it out and let your children enjoy too!

Back to the 16th TARF Open House (Online) | Please fill in the Open House survey form to facilitate better planning of outreach activities in the future.