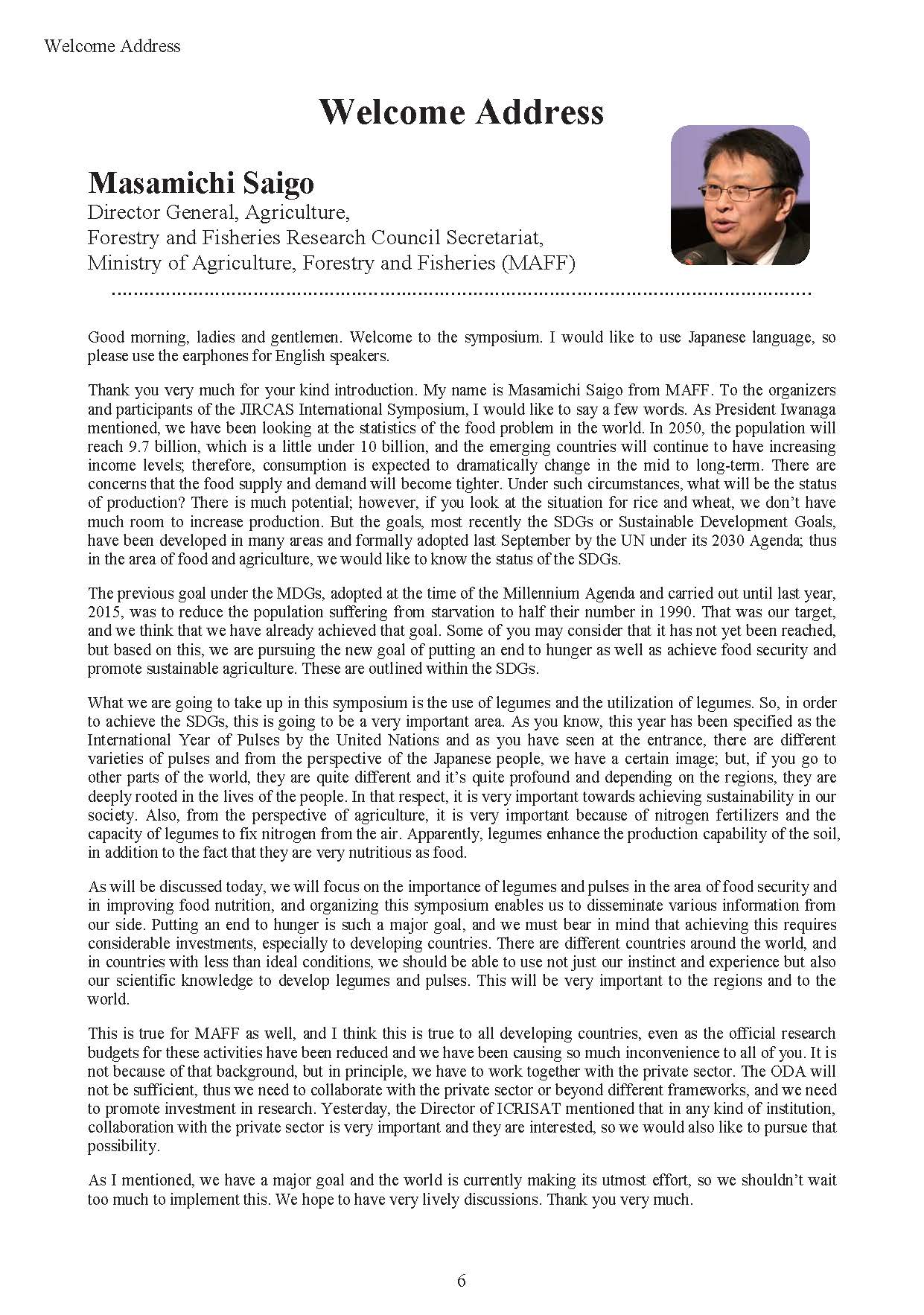 Good morning, ladies and gentlemen. Welcome to the symposium. I would like to use Japanese language, so please use the earphones for English speakers.

Thank you very much for your kind introduction. My name is Masamichi Saigo from MAFF. To the organizers and participants of the JIRCAS International Symposium, I would like to say a few words. As President Iwanaga mentioned, we have been looking at the statistics of the food problem in the world. In 2050, the population will reach 9.7 billion, which is a little under 10 billion, and the emerging countries will continue to have increasing income levels; therefore, consumption is expected to dramatically change in the mid to long-term. There are concerns that the food supply and demand will become tighter. Under such circumstances, what will be the status of production? There is much potential; however, if you look at the situation for rice and wheat, we don’t have much room to increase production. But the goals, most recently the SDGs or Sustainable Development Goals, have been developed in many areas and formally adopted last September by the UN under its 2030 Agenda; thus in the area of food and agriculture, we would like to know the status of the SDGs.

The previous goal under the MDGs, adopted at the time of the Millennium Agenda and carried out until last year, 2015, was to reduce the population suffering from starvation to half their number in 1990. That was our target, and we think that we have already achieved that goal. Some of you may consider that it has not yet been reached, but based on this, we are pursuing the new goal of putting an end to hunger as well as achieve food security and promote sustainable agriculture. These are outlined within the SDGs.

What we are going to take up in this symposium is the use of legumes and the utilization of legumes. So, in order to achieve the SDGs, this is going to be a very important area. As you know, this year has been specified as the International Year of Pulses by the United Nations and as you have seen at the entrance, there are different varieties of pulses and from the perspective of the Japanese people, we have a certain image; but, if you go to other parts of the world, they are quite different and it’s quite profound and depending on the regions, they are deeply rooted in the lives of the people. In that respect, it is very important towards achieving sustainability in our society. Also, from the perspective of agriculture, it is very important because of nitrogen fertilizers and the capacity of legumes to fix nitrogen from the air. Apparently, legumes enhance the production capability of the soil, in addition to the fact that they are very nutritious as food.

As will be discussed today, we will focus on the importance of legumes and pulses in the area of food security and in improving food nutrition, and organizing this symposium enables us to disseminate various information from our side. Putting an end to hunger is such a major goal, and we must bear in mind that achieving this requires considerable investments, especially to developing countries. There are different countries around the world, and in countries with less than ideal conditions, we should be able to use not just our instinct and experience but also our scientific knowledge to develop legumes and pulses. This will be very important to the regions and to the world.

This is true for MAFF as well, and I think this is true to all developing countries, even as the official research budgets for these activities have been reduced and we have been causing so much inconvenience to all of you. It is not because of that background, but in principle, we have to work together with the private sector. The ODA will not be sufficient, thus we need to collaborate with the private sector or beyond different frameworks, and we need to promote investment in research. Yesterday, the Director of ICRISAT mentioned that in any kind of institution, collaboration with the private sector is very important and they are interested, so we would also like to pursue that possibility.

As I mentioned, we have a major goal and the world is currently making its utmost effort, so we shouldn’t wait too much to implement this. We hope to have very lively discussions. Thank you very much.