An overview of legume cultivation in Japan 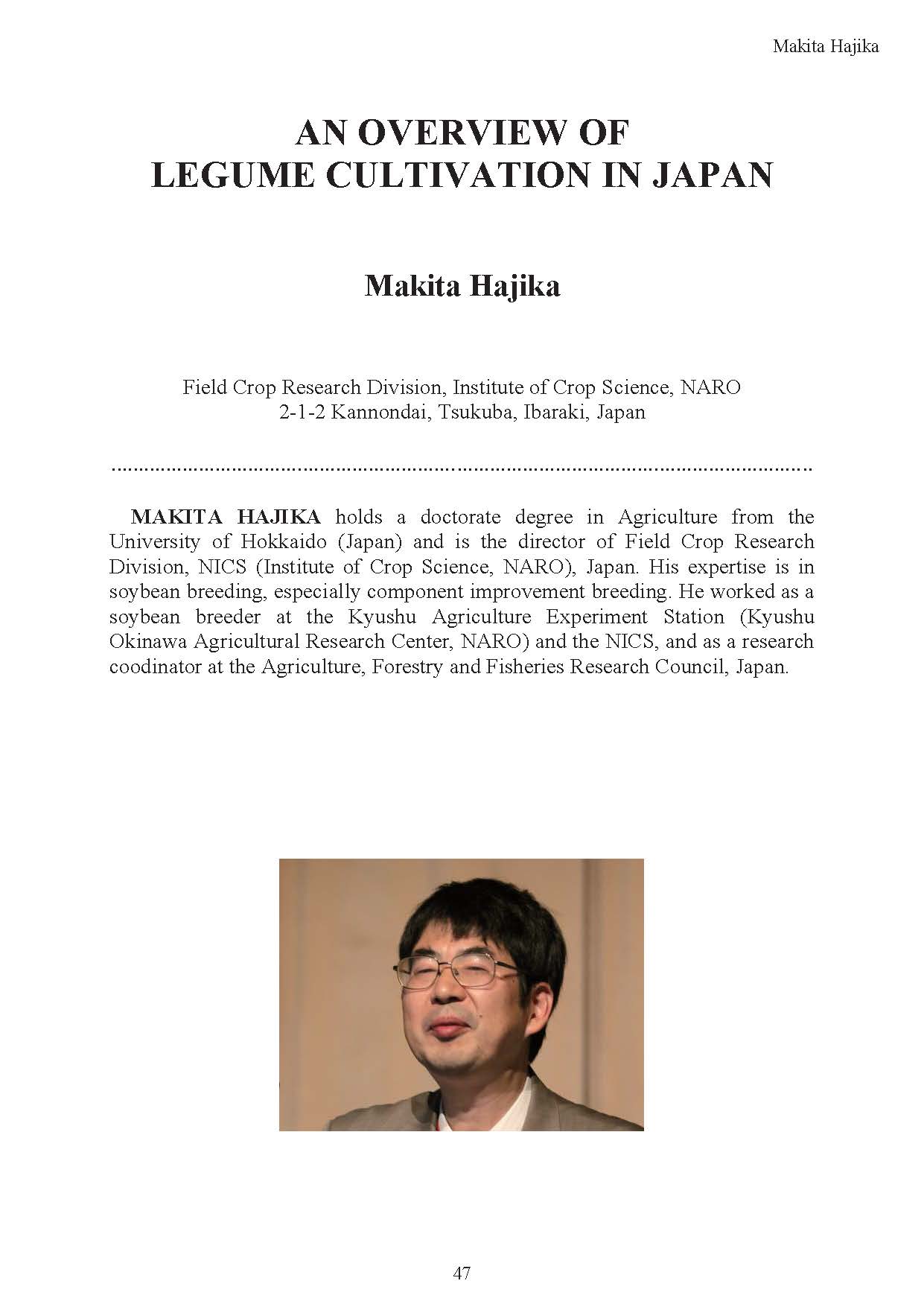 The volume of legumes produced by Japanese agriculture is small, but in Japanese traditional food culture, their presence is significant. Soybeans and adzuki beans are processed into Japanese traditional foods such as tofu, natto, soy sauce and adzuki bean paste (bean jam). Furthermore, other legumes introduced recently, such as green pea and sugar pea, have already become very popular in Japanese menus. In my lecture, I will explain the present situation of legume cultivation in Japan.

Soybean is the most planted legume in Japan in terms of acreage (141,800 ha). Most soybeans are cultivatedfor dry seeds. To prevent the overproduction of rice, the Japanese government recommends the cultivation of soybean instead of rice. Hence we commonly see soybeans in Japanese paddy fields. About 20-30 years ago, Japanese farmers usually planted soybeans on a small scale, and seeding and harvesting were performed manually. But recently, mechanization of soybean cultivation became more widespread at production sites, encouraging the cultivation scale of soybean to become larger as well.

Another soybean type is edamame (green soybeans). Edamame, i.e, the boiled young soybean pod, is a very popular snack in Japan, often served as a partner or appetizer to beer. Edamame's planted acreage is only 1/10 of dry seeds, but total production value is almost the same as those of dry soybean seeds. The main production areas of edamame are Kanto and Tohoku (East and Northeastern) regions.

The cultivation area of kidney beans is about 9,000 ha, with over 95% of Japanese kidney bean production coming from Hokkaido region. Kidney beans are mainly used for making bean jam and as boiled beans. For vegetable grade (green bean), the planted acreage is about 5,800 ha and the main producing regions are Kanto and Tohoku.

Peanut came to Japan in 18th century. Currently, the total production acreage is about 7,000 ha. It is mainly processed as snacks like roasted pods and beans. The main production area of peanut is Southern Kanto (East) region, especially Chiba prefecture. The scale of peanut cultivation is small, so harvesting and drying operations are still done manually.

Pea and broad beans are mainly used as vegetables. Podded peas and green peas, with a total production acreage of about 3,000 ha, find major usage in Japan. Dry pea production is little and limited mainly to Hokkaido.I It is used for snacks such as bean paste and fried beans. Broad bean, with about 2,000 ha cultivation area, is used like edamame.

About other legumes, there are not enough statistical data. Surely, we can find other legumes, such as cowpea and winged bean, in farmers' fields. However, the production scale is not large and they are cultivated much like those in kitchen gardens. In the Southwest region, cowpeas are often confused with and planted instead of adzuki beans. Winged bean is mainly planted at Okinawa region and used for vegetable dishes. Mung bean is popular as a bean sprout, but most mung beans are imported and there are none or only little cultivation in Japan.